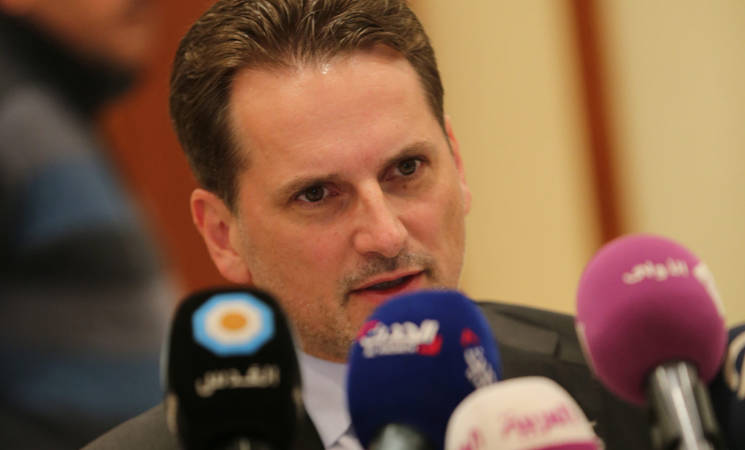 The Commissioner-General of UNRWA, Pierre Krähenbühl, has said that “the pressures on Palestinians and Palestine refugees are immense and the threats to their lives, livelihoods and future are of such magnitude that hope is needed somewhere on the horizon. Hope”, he added, “in this most unstable region - can only and must be brought about by resolute political action”. He was speaking at the Agency’s Advisory Commission at the Dead Sea, which brings together donor governments and host authorities.

However, on Gaza he said that "despite initial results, the process for reconstruction is proving far too slow and is largely ineffective."  Mr Krähenbühl said “should this continue, we will reach the winter with no progress in rebuilding the homes of the many still displaced, including those still in UNRWA schools. The people of Gaza deserve much better and much more than that,” he stressed.

Mr Krähenbühl told the meeting that he “welcomed the Cairo Donors Conference and the significant pledges made”, but that these needed “urgently to be transformed into actual disbursements”. In addition, he welcomed the visit to Gaza in October of the Palestinian Prime Minister Rami Hamdullah, but said that “ongoing leadership by the government of national consensus was needed to ensure that the reconstruction can take place. A genuine commitment by Israel is also required to enable the needed material to be brought to Gaza”.

“This should not be a time for wait-and-see attitudes on anybody’s side. The actors who agreed to the temporary mechanism for taking goods into Gaza should be held accountable for its implementation. Time is running out, tempers are rising and people are desperate”, he warned.

Moving to Syria, the Commissioner-General said “over 60% of the Palestine refugees are now displaced or have become refugees a second time over, in Lebanon, Jordan and several other countries in the region. Fleeing the conflict, though, is becoming more difficult by the day as borders are closing, forcing refugees to take increasingly dangerous routes across conflict zones or the Mediterranean, in their attempt alongside many others to reach Europe”.

The Yarmouk refugee camp remained of deep concern, with 16,000 to 18,000 civilians  trapped, living in hunger, cold and constant fear. Mr Krähenbühl said “since this summer, there has been a noticeable decline in what the Agency has been able to bring into Yarmouk.  Far more needs to be done in terms of assistance and of protection for the people in Yarmouk, something that continues to be explicitly and openly raised with the Syrian authorities”.

Giving details of damage to UNRWA property in Syria, Mr Krähenbühl told delegates, “76 UNRWA schools – more than two-thirds – have become unusable. Most were damaged by the conflict or are now in areas too dangerous to reach. Fifteen of these are currently used as collective shelters, housing over 6,000 people together with Damascus Training Centre and other UNRWA facilities. Schools engulfed in the fighting is another dramatic example of the disregard for the sanctity of civilian life shown by parties to this conflict and it must be condemned”, he said.

On the question of UNRWA’s five year plan up to 2021, known as the Medium Term Strategy, Mr Krähenbühl said “strategic priorities will begin with a focus on protection and rights for all refugees including the most vulnerable, because, at the end of the day, however good services are, they will never fully compensate for the unfulfilled, legitimate expectation of refugees to see their rights respected”.