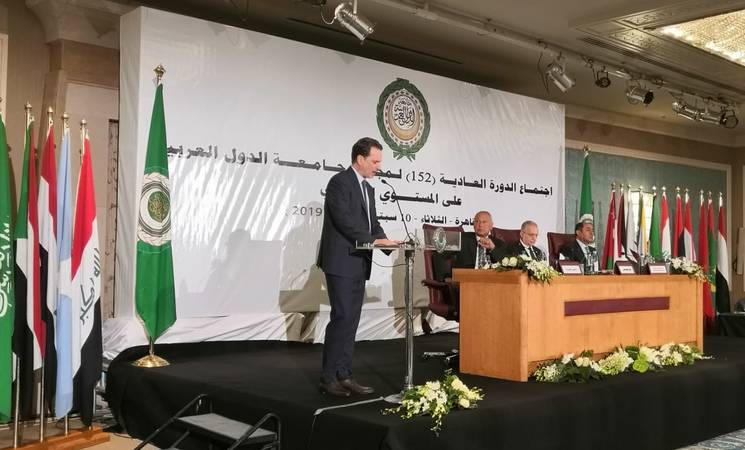 The Commissioner-General of the United Nations Relief and Works Agency for Palestine Refugees in the Neat East (UNRWA) Pierre Krähenbühl, has urgently called on Arab states for their continued financial and political support to Palestine refugees and to the work and role of the Agency at the Arab League Summit.

Addressing the 152nd session of the Council of Arab Foreign Ministers, Mr. Krähenbühl highlighted that the work of UNRWA remains vital, especially as long as there is no just and lasting solution to the plight of Palestine refugees.  He thanked member states of the League of Arab States for their support and asked them to show the same level of commitment to defending UNRWA as has been the case in all previous years, particularly in the run-up to the renewal of the Agency’s mandate in November.

UNRWA Commissioner-General held meetings with the Secretary-General of the League of Arab States, Dr. Ahmad Aboul Gheit and with the foreign ministers of Egypt, the State of Palestine, Iraq and Qatar, as well as with the Deputy Foreign Minister of Kuwait in Cairo on Tuesday, 10 September.

“UNRWA is facing enormous political challenges,” said Arab League Secretary-General Ahmad Aboul Gheit. “I call on Member States to protect funding to UNRWA and to ensure the smooth renewal of the Agency’s mandate.”

Mr. Krähenbühl reiterated his and the Agency’s gratitude to members of the League of Arab States for their outstanding support in 2018; the most financially challenging year since UNRWA was created in 1949. Mr. Krähenbühl also reminded them that the crisis is neither resolved nor was it simply financial in nature.

Running at an annual budget of US$ 1.2 billion, UNRWA is mandated to serve 5.5 million Palestine refugees through the Agency’s education, health, social and protection services in five areas of operations. Last week, 709 UNRWA schools opened their doors for a new scholastic year to over 530,000 girls and boys across the region. In 2018, over 8 million medical consultations were conducted in 143 UNRWA health centres. UNRWA services not only contribute to the wellbeing and development of human beings, they also provide a sense of normalcy and stability to those who receive them.

“Over the last eighteen months, we have witnessed severe attempts to delegitimize the Agency and what it does, either by questioning the very basis of our mandate or the definition of who we serve,” said Mr. Krähenbühl. “Standing with UNRWA and its services in the West Bank, including East Jerusalem, Gaza, Syria, Lebanon and Jordan is paramount not only for the human development of Palestine refugees, but also  for the preservation of regional stability.”