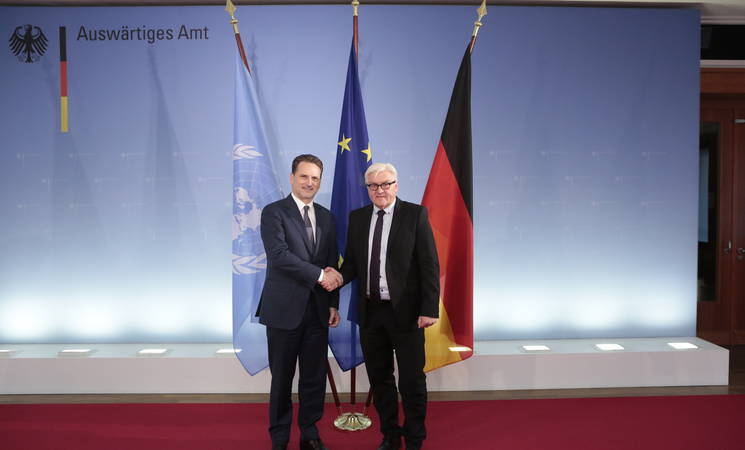 The Commissioner-General of the United Nations Relief and Works Agency for Palestine Refugees in the Near East (UNRWA), Pierre Krähenbühl, visited Munich and Berlin on 17, 18 and 19 October for a series of high-level meetings aimed at further strengthening the strategic UNRWA-Germany partnership and increasing awareness of the Agency’s work.

Mr. Krähenbühl was also invited by the chair of the Bundestag Committee on Human Rights and Humanitarian Aid Michael Brand to brief committee members about the challenges faced by Palestine refugees and met with members of various other parliamentary committees, including the Deputy Head of the SPD Group in Parliament, Dr. Rolf Mützenich. The Commissioner-General also engaged in further discussions with the Director of the German Institute for International and Security Affairs (Stiftung Wissenschaft und Politik), Dr. Volker Perthes, and the Chairman of the Munich Security Conference, Ambassador Wolfgang Ischinger.

During the mission, the first-ever visit of an UNRWA Commissioner-General to the Federal State of Bavaria took place upon an invitation from the German-Arab Friendship Society and its President, Dr. Otto Wiesheu. Mr. Krähenbühl met with the State Minister for Employment and Social Affairs, Family and Integration, Emilia Müller; the Head of the Bavarian State Chancellery and Minister for Federal Affairs and Special Affairs, Dr. Marcel Huber; and representatives of the BMW Quandt Foundation. In the evening, he participated in a public event organized by the Hanns Seidel Foundation and the German-Arab Friendship Association (DAFG).

These meetings were an opportunity for Mr. Krähenbühl to discuss the humanitarian and operational situation in the Agency’s five fields of operations, specifically in Gaza and Syria, as well as the question of refugees in the region more broadly. In his discussions, the Commissioner-General highlighted the need for decisive political action to address the root causes of the conflict and the risks associated with the continued absence of a horizon for peace and economic prospects, especially for Palestine refugee youth.  Mr. Krähenbühl also reminded its interlocutors of the precarious financial situation of UNRWA and called for collective efforts to enhance the Agency’s financial sustainability.

Acknowledging Germany’s significant financial support to UNRWA, the Commissioner-General stated, “Germany is not only a generous donor but a strategic partner that is investing in the future of Palestine refugees. By supporting projects such as the reconstruction of the Nahr el-Bared Camp in Lebanon and rebuilding the Gaza Strip, Germany is giving thousands of Palestine refugees hope and dignity.” During the visit, the German Government announced new pledges of EUR 4 million in additional support for emergency food assistance in Gaza and EUR 18.45 million for reconstruction in Gaza, as well as camp improvement projects in the Agency’s other fields of operations.

Overall, in 2015, Germany contributed US$ 91.7 million (EUR 83.2 million) to UNRWA. Germany is the Agency’s fifth largest donor and has been a member of the UNRWA Advisory Commission since 2005.