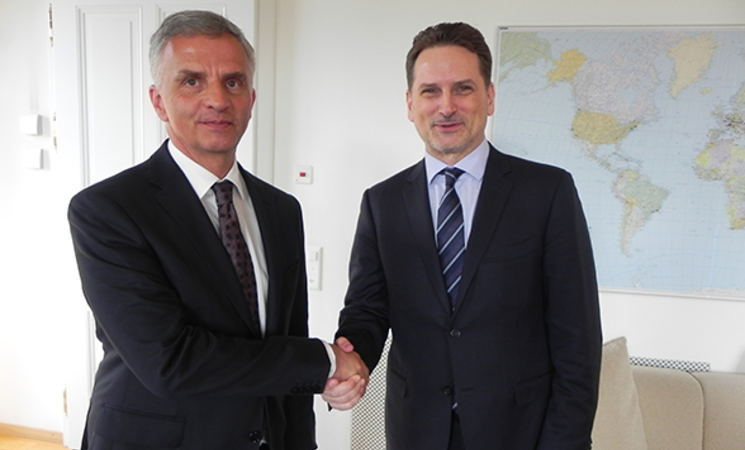 UNRWA Commissioner-General Pierre Krähenbühl has completed a two-day visit to Switzerland, during which he held talks with senior officials of the Federal Department of Foreign Affairs and the Swiss Agency for Development and Cooperation (SDC) and briefed the External Affairs Committee of the Upper House of the Swiss Parliament on the work of UNRWA in an increasingly volatile Middle East.

Following his meeting with Federal Councillor Didier Burkhalter, Mr. Krähenbühl said he was “grateful for the opportunity to engage with Switzerland at this level, given the increasingly vital contribution that the Swiss Government and people are making to some 5 million Palestine refugees through the human development and emergency work of UNRWA.”

During the two-day mission, Mr. Krähenbühl provided an update on the situation of Palestine refugees in the region, particularly the West Bank, Gaza and Syria, as well as the impact on Lebanon and Jordan of increased refugee flows from Syria. He also highlighted the importance of UNRWA as a stabilizing entity and the potential consequences to the Middle East region, to Switzerland and to Europe of UNRWA not being able to fulfil its mandate, such as instability or additional refugee flows.

“No one wants to be a refugee,” he said, “and certainly no one wants to take their families on perilous journeys out of the Middle East unless absolutely necessary. It is important to make sure that well-funded UN humanitarian agencies are able to give people the services they need in the region.”

During his meeting with the head of SDC, Ambassador Manuel Sager, the Commissioner-General also expressed appreciation for Switzerland’s steadfast and strategic support to UNRWA, highlighting the exceptional specific assistance the Swiss Agency for Development Corporation continues to provide for protection, communication and change management initiatives and other key reforms.