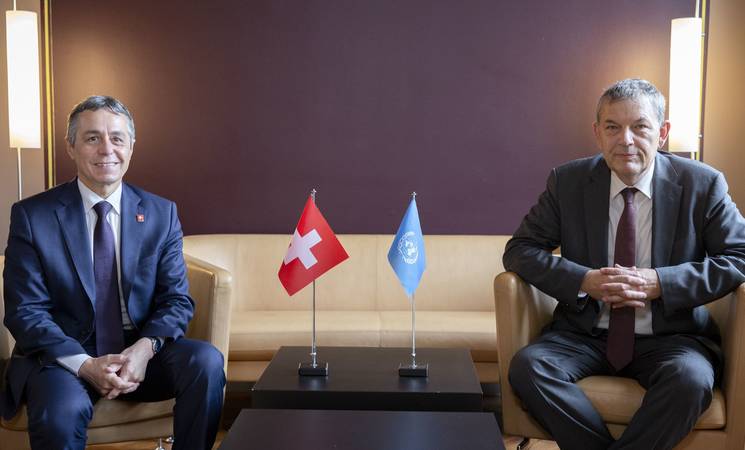 The Commissioner-General of the United Nations Relief and Works Agency for Palestine refugees in the Near East (UNRWA), Philippe Lazzarini, has completed a visit to Switzerland, during which he met with Vice President of the Federal Council and Head of the Federal Department of Foreign Affairs (FDFA), Mr. Ignazio Cassis, and held talks with other FDFA senior officials and the Swiss Agency for Development and Cooperation (SDC), as well as members of parliament. He also officially briefed the Swiss Parliament’s two Foreign Affairs Committees of the National Council and the Council of States, focusing on the humanitarian and socio-economic situation of Palestine refugees in the Middle East, the impact of UNRWA development programmes and emergency assistance, and the Agency’s role as a stabilizing entity for refugees, host states and the region at large.

“I wish to thank Switzerland for the generous support extended to UNRWA and Palestine refugees,” said the UNRWA Commissioner-General. “Discussions with officials in Bern confirmed that both the Foreign Policy goals of Switzerland and the mandate of UNRWA seek to contribute to the empowerment of Palestine refugees to help them break free from dependence on humanitarian assistance.  This is even more relevant in the region today, where Palestine refugees need hope and sense of stability in the face of tensions, conflicts, poverty and COVID-19.”

This is the Commissioner-General’s second visit to Switzerland in less than a year and a way for UNRWA to recognize the support it receives from the Confederation. In 2020, Switzerland was ranked the Agency’s sixth largest donor in terms of overall funding to UNRWA, with over US$ 29.5 million in contributions, and approved in 2021 new multi-year funding for the UNRWA core budget, strategic interventions in the area of TVET and job creation and UNRWA reforms.

“Besides Switzerland’s vital financial contribution to UNRWA services for Palestine refugees, we are also immensely grateful for the good cooperation with the Swiss government, including through the SDC in a number or strategic areas, such as protection, resource mobilization and internal reform and change management efforts to modernize services, strengthen UNRWA governance structure and enhance accountability and transparency,” said Commissioner-General Lazzarini.