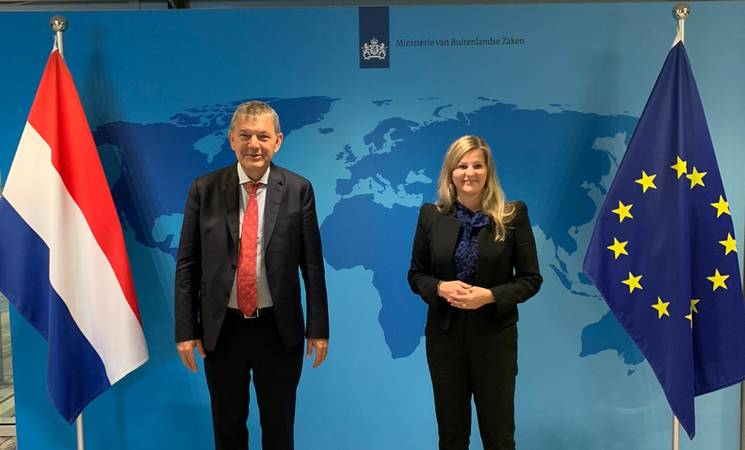 The Commissioner-General of United Nations Relief and Works Agency for Palestine Refugees (UNRWA), Philippe Lazzarini, made his first official visit to the Hague between 17-18 May to meet with its newly elected government and discuss the long-standing cooperation between UNRWA and the Netherlands. Mr. Lazzarini held meetings with Minister of Trade and Development Cooperation Liesje Schreinemacher, senior government officials, members of Parliament and civil society representatives.

Mr. Lazzarini thanked the Government of the Netherlands, "We thank the Netherlands for its consistent support to Palestine refugees through UNRWA. By doing so, the Netherlands shows it commitment to the human development of one of the most destitute community across the region supporting poverty alleviation, reductions in inequality and access to quality health and educational services Mr. Lazzarini also addressed the new challenges Palestine refugees are facing. The current rise in food prices in the region adds a layer of hardship to an already dire situation. UNRWA needs sufficient funding to cover their needs and offer young Palestine refugees the prospect of a more a better future.”

During his meeting with Ms.  Schreinemacher, Mr. Lazzarini provided an overview of the Agency’s work in its five fields of operation and its role in maintaining peace and stability in the region. The Commissioner-General also met with the Ambassador of the State of Palestine to the Netherlands, H.E. Rawan Sulaiman, and with Arab Ambassadors within the Hague. In addition, he met the Dutch Relief Alliance, the Rights Forum and students from Leiden University.

The Netherlands is a longstanding partner to UNRWA. In 2021, the Dutch government supported the Agency with a total of EUR 23 million, including EUR 4 million to the UNRWA occupied Palestinian territory Emergency Appeal.