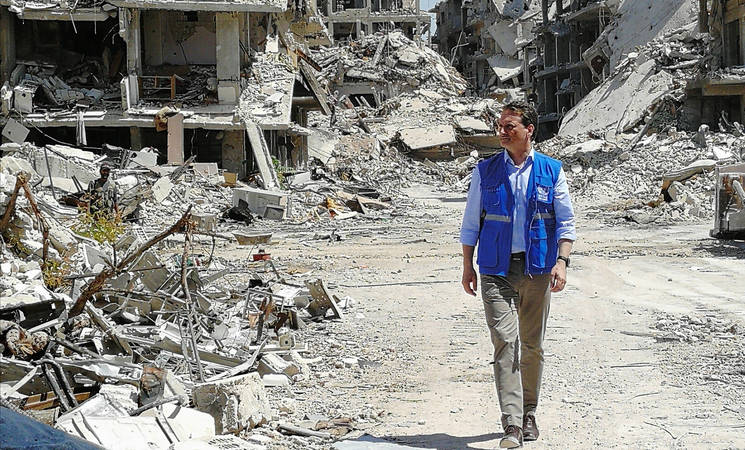 UNRWA Commissioner-General Pierre Krähenbühl visited Yarmouk today, the first senior UN official in years to access the camp, which remains an enduring symbol of the Palestine Refugee diaspora, and of the extreme human costs of the devastating conflict in the country.  Mr. Krähenbühl said, “The scale of the destruction in Yarmouk compares to very little else that I have seen in many years of humanitarian work in conflict zones”.

Once a proud neighborhood home to some 160’000 Palestine refugees, the camp now lies in utter ruin. Wherever one looks, the horror experienced by inhabitants of Yarmouk is all too evident. Yet again, Palestine refugees were exposed to the trauma of displacement, loss of relatives, homes and livelihoods. “In every visit to Syria over the past years - and again during this visit - Palestine refugees have spoken of the pride of what Yarmouk represents in the history of the community”, the Commissioner-General underlined, adding “Today, they express deep anxieties about what the immediate and longer-term future holds and about the prospect of return and reconstruction”.

Carrying out a three-day mission to Syria from 1 to 3 July 2018, the Commissioner-General also met with Palestine Refugees, UNRWA students and staff, as well as with senior government officials and diplomats.

Mr. Krähenbühl visited Yalda, to meet Palestine refugees displaced from Yarmouk, including during the most recent round of fighting in the neighborhood, when Government forces re-established control of the area. Speaking to refugees during distributions of aid in Yalda, the Commissioner-General heard stories of unimaginable despair, from people who faced extreme conditions, suffering and pain inside Yarmouk over the years: “Being able to access Palestine refugees again in Yalda, was very important for UNRWA. Providing essential assistance to people who have been exposed to such dramatic circumstances, lies at the heart of our mission”.

Mr. Krähenbühl also travelled to Sbeineh, a previously an embattled area to the south of Damascus, to which Palestine refugees have been authorized to return. UNRWA rehabilitated key installations - its schools, clinics and community centers - providing vital services to some 10,000 Palestine refugees and helping to recreate a sense of normalcy for a deeply scarred community, and encouraging further returns. “The impact of people returning to their homes, often after years of internal displacement, is very significant. UNRWA’s long experience in Syria has allowed us to play an important supportive role to the refugee community in Sbeineh”, said the Commissioner-General.

In Damascus itself, Mr. Krähenbühl took part in a ceremony to honor a group of highest performing 9th Grade UNRWA students, the vast majority of whom are girls. This included a meeting with Aya Abbas, who was born and grew up in Yarmouk, before having to flee the camp in late 2012 when the conflict engulfed the neighborhood. Despite the immense adversity, she scored top marks in all her final exams. Mr. Krähenbühl congratulated her and the other students for their courage and achievements: “You are an inspiration to all Palestine refugees and to the world”.

The Commissioner-General held meetings with UNRWA staff in Damascus, Yalda and Sbeineh, as well as from Aleppo, Dera’a, and Homs, first and foremost to express his deep respect and recognition for their outstanding determination and courage over all these years of conflict. At a time when the Agency faces an unprecedented financial crisis, staff expressed strong worries about the possible impact on services. The Commissioner-General informed them of latest developments in the efforts to mobilize the critically needed additional funding, noting that UNRWA will knock at every door and reach out to every existing and potential donor: “I cannot imagine saying to our proud students that we have failed to keep open the schools that are so important in their lives”.

These meetings were an important opportunity to discuss the situation of Palestine refugees in Syria, the need for ongoing steps to ensure their security and protection, as well as access to some of the delicate areas where Palestine Refugees are located. The meetings focused in particular on Yarmouk and the prospects of return for Palestine refugees. The Commissioner-General highlighted UNRWA’s strong determination to stand with the Palestine refugee community and confirmed that the Agency is prepared to carry out a broader assessment of conditions in Yarmouk once security and more general access opportunities permit.

Mr. Krähenbühl expressed recognition for the support received from the Government in terms of recent access approvals to access Yalda, and Yarmouk today, and stated UNRWA’s readiness to provide additional support to Palestine refugees in and around Dera’a, who are currently experiencing significant hardship and risks in light of the escalation of violence in the south of Syria.

The Commissioner-General also repeated his appeal for ongoing protection and respect for UNRWA's staff in their daily activities. This is a matter of utmost importance and UNRWA itself has taken several initiatives to strengthen its ability to support staff facing a diversity of security concerns.

While in Syria the Commissioner-General called on the world to preserve its commitment and support to Palestine refugees: "if we are serious about leaving no one behind, we need to match the unparalleled courage shown by UNRWA students and celebrate their skills. UNRWA’s education and other services need to stay open. It is a matter of rights and dignity”.