UNRWA Commissioner-General Sworn in at a Ceremony in New York 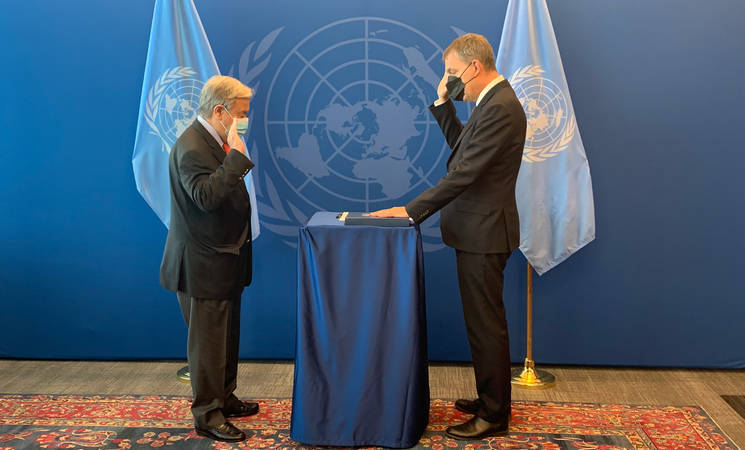 The Commissioner-General of the United Nations Relief and Works Agency for Palestine refugees in the Near East (UNRWA) Philippe Lazzarini has been officially sworn into office by UN Secretary-General António Guterres.

Mr. Lazzarini took his oath of office at a ceremony in New York on 30 September 2021, nearly 18 months after having officially assumed his position. The ceremony had been postponed due to restrictions imposed by COVID-19.

“I, Philippe Lazzarini, solemnly declare and promise to exercise in all loyalty, discretion and conscience the functions entrusted to me as an international civil servant of the United Nations,” said the Commissioner-General.

Mr. Lazzarini came to UNRWA with nearly thirty years of experience in humanitarian assistance and international coordination in conflict and post-conflict areas in the United Nations, including as Deputy Special Coordinator, Resident and Humanitarian Coordinator for Lebanon in the Office of the United Nations Special Coordinator for Lebanon (UNSCOL), head of delegations for the International Committee of the Red Cross (ICRC) and the private sector.

Since he took office in April 2021, Philippe Lazzarini has conducted numerous missions in the Agency’s fields of operations, engaging with Palestine refugees and stakeholders, has intensively engaged with Member States and addressed both the UN Security Council and 4th committee of the UN General Assembly. He is currently finalizing a strategy for a modern, efficient and resolutely principled UNRWA, in line with the mandate it receives from the General Assembly.

“It is imperative that UNRWA remains the strong UN Agency that it has been since it was created, an Agency that succeeded in promoting human development in the region,” said Mr. Lazzarini.  “UNRWA has rolled out one of the most cost-effective and highly successful education systems in the Middle East, significantly lowered maternal mortality rates, and addressed food insecurity stemming from protracted conflict. As the Commissioner-General of UNRWA, I will spare no effort to seek solutions that ensure both the short-term continuity of UNRWA services, as well long-term sustainable and predictable funding of the Agency.”