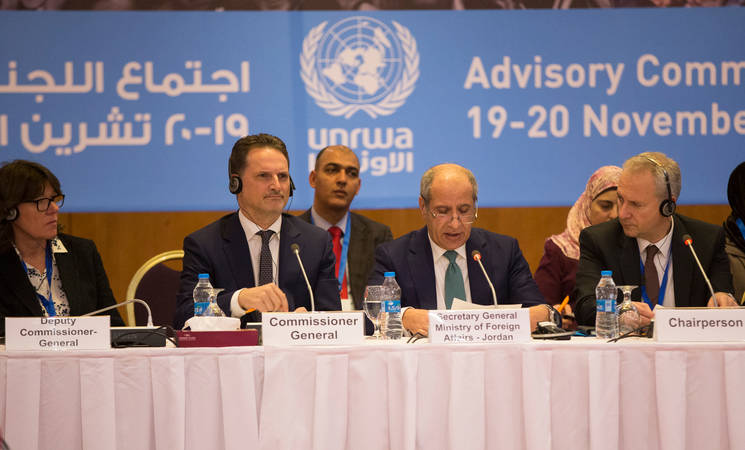 Addressing the delegates at the Advisory Commission of host governments and leading donors of the United Nations Relief and Works Agency for Palestine Refugees in the Near East (UNRWA), meeting in Jordan on 19 November, UNRWA Commissioner-General Pierre Krähenbühl lauded the resolve and creativity with which the Agency and the international community addressed its “greatest financial predicament ever”.

Krähenbühl paid tribute to the Agency’s many partners who “rose to the occasion” to help – collectively – reduce the staggering shortfall of US$ 446 million at the start of this year: “Today, I am very pleased to announce that, overall since January, donors contributed or pledged an additional US$ 425 million, bringing our shortfall down to US$ 21 million”.

The Commissioner-General explained that, in response to this year’s profound financial challenge, UNRWA “launched a global campaign called #DignityIsPriceless, bringing about a renewed spirit of multi-lateral cooperation.” He continued, “the collective mobilization is deeper and broader than we’ve seen in decades, accompanied by diplomatic engagement at the highest level.”  Forty Member States and institutions either increased support or gave new pledges.  He thanked the European Union and its member states for their remarkable financial response.  Krähenbühl also emphasized that four Arab partners showed “true humanitarian leadership” by substantially increasing support in 2018 – Kingdom of Saudi Arabia, State of Kuwait, the United Arab Emirates, as well as State of Qatar which UNRWA looks forward to welcoming as a member of its Advisory Commission in 2019.

The Commissioner-General also gave particular recognition to Jordan and Sweden for their exemplary support and leadership, as well as Egypt, Turkey, Japan, Germany and the EU for convening two special events to marshal international backing for UNRWA.

He extended a special thanks to the UN Secretary-General, the EU High Representative and the Secretaries General of the League of Arab States and the Organization of Islamic Cooperation, for their roles in the positive results achieved.

The Commissioner-General also emphasized the vital role played by Host governments, not only in assuming historic responsibilities towards the Palestine refugees but also in mobilizing additional support for UNRWA, and the special contribution of Palestine in that regard.

Welcoming Azerbaijan, China, and Malaysia as guests to the Advisory Commission meeting, the Commissioner-General further noted that Asian Member States are increasingly important supporters of UNRWA.

“When, thanks to the contribution of many Member states this year, we were able to open the 711 UNRWA schools on time, it was a moment of pure and simple celebration. We celebrated the preservation of the right to education for 530,000 girls and boys, from Aleppo to Rafah in the Gaza Strip,” the Commissioner-General said, whilst recalling that together, UNRWA and its partners contributed to one of the most successful human development processes for a refugee community in recent history.

Other new funding streams under development include a World Bank Multi-Donor Trust Fund and the establishment of an Islamic Waqf.

Krähenbühl also asked donors who had pledged but not yet disbursed additional funding to do so urgently.