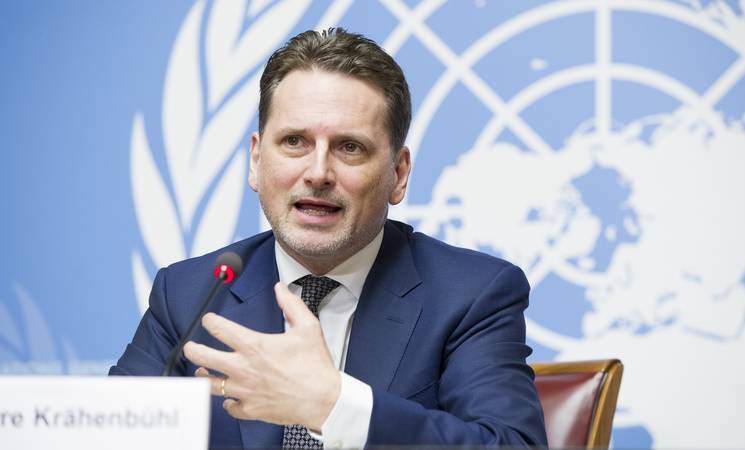 UNRWA Commissioner-General Pierre Krähenbühl participated in the XVIII Summit of the Heads of State and Government of the Non-Aligned Movement (NAM) in Baku, Azerbaijan, on 25 and 26 October 2019. This was the first time UNRWA was invited to attend and speak at a NAM Summit, signaling strong recognition and support for the work and role of the Agency.

Mr Krähenbühl called on the 120 states present at the Summit for support to preserve the rights and dignity of 5.5 million Palestine refugees in the West Bank, including East Jerusalem, Gaza, Lebanon, Jordan and Syria. “Standing with UNRWA, its mandate and its services, is a fundamental measure of the readiness of states to protect human dignity, defend the rights of Palestine refugees and preserve regional stability,” he said.

In his address at the Summit, the Commissioner-General reminded participants of the resolve and commitment that Palestine refugees show every day in the face of the dire circumstances in which many of them live: “I have never seen a more courageous and determined community than the 532,000 students in UNRWA schools. Preserving their rights and future is the most noble responsibility I can think of.”

Mr Krähenbühl called for renewed generosity from member states of the NAM to help UNRWA close its remaining 2019 shortfall which remains at US$89 Million, an amount that risks impacting the delivery of key UNRWA services if not overcome. He also urged members to support the upcoming renewal of the UNRWA mandate at the United Nations General Assembly.

Following the 1948 Arab-Israeli conflict, UNRWA was tasked by the United Nations General Assembly, in its Resolution 302 (IV) of 8 December 1949, to provide assistance for Palestine refugees. In the absence of a just and lasting resolution of the conflict, the General Assembly has regularly renewed mandate of UNRWA, most recently extending it until 30 June 2020. The Agency’s services encompass education, health care, relief and social services, camp infrastructure and improvement, microfinance, protection and emergency assistance, including in times of armed conflict.

In the final declaration of the Baku Summit, NAM member states, among others, strongly commended the efforts of UNRWA in providing vital support and emergency assistance to the Palestine refugees, urged support to the Agency for the implementation of its mandate and called to urgently address the chronic funding shortfalls faced by UNRWA.

The UNRWA Medical Hardship Fund at work in Lebanon
UNRWA Requires US$ 149 million in 2020 for operations in Jordan
End of year message from the Commissioner-General
Japan Contributes Over US$ 11 Million for Food, Education and Sanitation for Palestine Refugees
2020 syria regional crisis emergency appeal
2020 oPt emergency appeal
Meeting the Human Development and Humanitarian Needs of Palestine Refugees