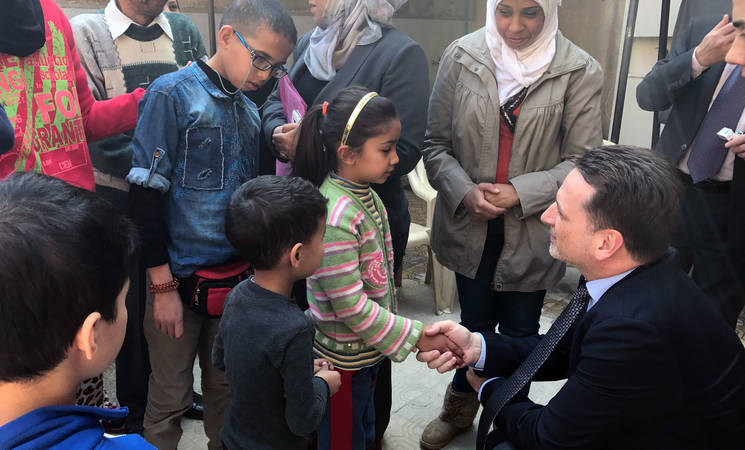 The primary focus of the visit was a three-day mission to Aleppo during which the Commissioner-General gained a detailed understanding of the protection concerns and needs of some 25,000 Palestine refugees who remained in this embattled and deeply scarred city and region of northern Syria over the last six years.

Mr. Krähenbühl had access to Ein el-Tal, a camp from where Palestine refugees were forcibly driven by armed groups in April 2013 and which today lies in ruin. The Commissioner-General met with representatives of refugees displaced from Ein el-Tal, many of whom have lived in overcrowded and precarious shelters for almost four years: "In their words, I heard the pain of another generation of Palestinians enduring the trauma of loss and devastation. Their demands were humble but their plight immense."

A separate visit took Mr. Krähenbühl to Neirab camp, where some 16,000 Palestine refugees live. While security conditions have improved for them in recent months, representatives of the community spoke of significant concerns about their immediate and longer-term future. They expressed deep recognition for the work by the UNRWA team in Aleppo who stayed and provided services throughout the conflict. The representatives also voiced the hope that the Agency would increase some of its programmes, notably in cash, food and health.

During the visit, the Commissioner-General met with many students, members of the school parliaments and youth representatives: "Once again, I was profoundly marked by the horrific experiences many of these children have gone through, losing parents, suffering injuries and at times extreme psychological shocks. I was also inspired by youth associations who are taking initiatives to help other boys and girls particularly affected by the violence and conflict."

The testimonies of these young Palestine refugees are inescapable reminders of the terrible cost of conflict on children. Nothing can address their needs more fundamentally than a political resolution of the current conflict. In the meantime, respect for the rules of international humanitarian law must be vastly improved and assistance to these communities sustained and, where possible, increased.

The Commissioner-General held meetings with UNRWA staff in Aleppo City and Neirab camp, first and foremost to express his deep respect and recognition for their outstanding determination and courage over all these years of conflict: "At a time when you worried every day about your own families and their safety, you showed such resolve in standing by Palestine refugees. I wanted to come to say 'thank you' in person," said Mr. Krähenbühl.

Remarkably, over all these years and despite the grave dangers, UNRWA preserved all of its key services, including education, sometimes in its own schools and in other cases in alternative accommodation made available by the authorities, an important element of cooperation. These achievements would not have been possible without the dedication of the Agency's 239 Palestinian staff in Aleppo and the support they received from colleagues in Damascus.

These meetings were an important opportunity to discuss the situation of Palestine refugees in Syria and the need for ongoing steps to ensure their security and protection, as well as access to some of the delicate areas where Palestine refugees are located, such as Yarmouk, Khan Eshieh, Dera'a and Aleppo. Mr. Krähenbühl noted with satisfaction the approval received for renewed access to Yalda, Babila, Beit Sahem and Khan Eshieh. The first mission to Khan Eshieh since December 2016 took place on 30 March, with delivery of medical and other much-needed supplies.

The Commissioner-General also appealed for ongoing protection and respect for the Agency's staff, who face significant risks in their daily activities. This is a matter of utmost importance and UNRWA itself has taken several initiatives to strengthen its ability to support staff facing a diversity of security concerns.

The visit of the Commissioner-General to Aleppo includes a message to the world not to forget Palestine refugees in the larger picture of the Syrian tragedy: "The history of Palestine refugees over the past seven decades is filled with so many chapters of suffering. No amount of humanitarian aid will ever make up for that. Respect for their rights and dignity is what they call for."