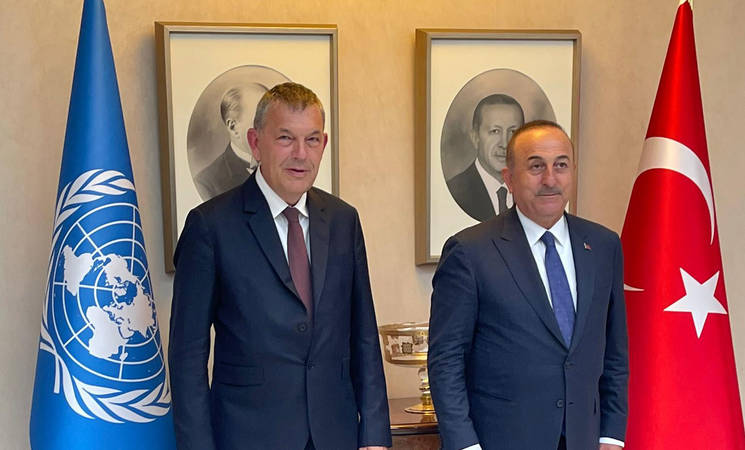 On Tuesday, 7 June, the Commissioner-General of the United Nations Relief and Works Agency for Palestine Refugees in the Near East (UNRWA), Philippe Lazzarini, concluded a two-day visit to Ankara, Türkiye. During the visit he met with the Minister of Foreign Affairs of the Republic of Türkiye, Mr. Mevlüt Çavuşoğlu, and senior representatives from Turkish aid institutions and Turkish parliamentarians to raise awareness of the current challenges facing Palestine refugees and discuss expanding UNRWA- Türkiye relations.

Minister of Foreign Affairs Çavuşoğlu said, “The essential services provided by the Agency contribute to the stability and security of the region. Our political and financial support to UNRWA will continue.”

The Commissioner-General meeting discussions focused on the deteriorating situation and increasing needs of Palestine refugees, including the impact of the pandemic and the Ukraine crisis, particularly on the cost of UNRWA delivery of emergency food assistance in Gaza, and ways in which the robust cooperation and partnership with Türkiye can be further strengthened.

“Türkiye’s generosity and unwavering political and financial support has once again helped to ensure the continued delivery of UNRWA services to Palestine refugees at a time of increasing needs and rising costs. I remain deeply appreciative of the Government of Türkiye for their continued efforts and look forward to further developing our important partnership to the benefit of Palestine refugees served by the Agency,” said UNRWA Commissioner-General Lazzarini.

The Government of Türkiye has been a steadfast partner to UNRWA and since 1949 has played a critical role in supporting the Agency. Türkiye’s support in multilateral platforms, including the UN, the Organization of Islamic Cooperation (OIC) and the Organization of Turkic States, as well as its direct financial contributions to UNRWA, are highly appreciated. Over the last four years, Türkiye has made annual contributions in the amount of US$ 10 million in support of the Agency’s core budget and in 2021 made an in-kind donation worth US$ 10.3 million for Palestine refugees in Gaza.