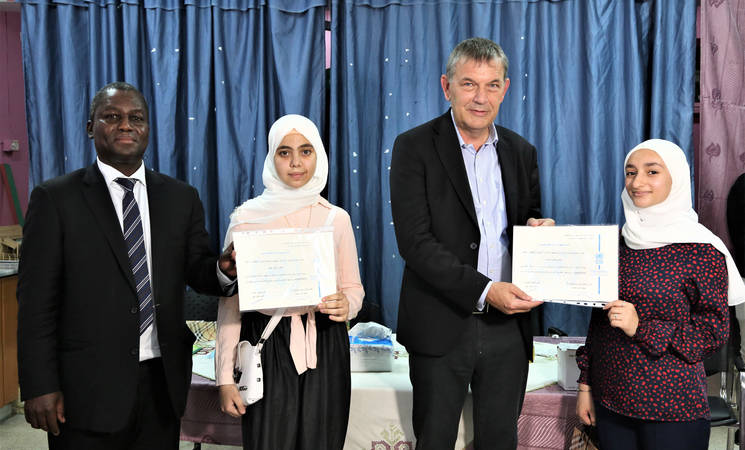 During his visit, the Commissioner-General met with the Minister of Foreign Affairs and Expatriates, Dr. Faysal Miqdad, the Deputy Minister of Foreign Affairs and Expatriates, Dr. Bashar al-Jaafari, the Governor of Homs, Mr. Bassam Barsik, and the Director-General of the General Authority for Palestinian Arab Refugees (GAPAR), Mr. Ali Mustafa. He briefed the government officials on the latest developments at UNRWA, financial challenges, plans to modernize the Agency’s services and increase its efficiency.

During a meeting between Mr. Lazzarini and the female staff at the  UNRWA field Office, the discussion focused on the importance of empowerment of women who should stand up for their rights and UNRWA efforts to strengthen the active and meaningful participation of women. “Women should have equal rights as well as equal access to leadership positions and opportunities,” Mr. Lazzarini underlined.  “Efforts to build a modern UNRWA continue with gender parity at their centre.”

In conversation with the young students at the UNRWA Damascus Training Centre, Mr. Lazzarini said: “Despite the hardships these young refugees have endured over the last ten years due to the war, they are still resilient and motivated. A modern UNRWA is one whose services enable young Palestine refugees to grow and compete with their peers elsewhere.”

The mission included a visit to Homs, where Mr. Lazzarini was briefed on the conditions of refugees in Homs camp and the major challenges and needs, including in education, health, youth, children, women and older persons especially during the pandemic. The Commissioner-General expressed his deep admiration for the courage and resilience of Palestine refugees and reaffirmed the commitment of UNRWA to provide support and services to them.  He also thanked staff for their tireless efforts in fulfilling their duties to support Palestine refugees in Syria.

Honoring two UNRWA high achievers in the 9th grade national exams in Homs, Mr. Lazzarini said: “We are proud of your remarkable success despite the severity of displacement and hardship you have gone through.  You are a source of inspiration to others.”

UNRWA is confronted with an increased demand for services resulting from a growth in the number of registered Palestine refugees, the extent of their vulnerability and their deepening poverty. UNRWA is funded almost entirely by voluntary contributions and financial support has been outpaced by the growth in needs. As a result, the UNRWA Programme Budget, which supports the delivery of core essential services, operates with a large shortfall. UNRWA encourages all Member States to work collectively to exert all possible efforts to fully fund the Agency’s Programme Budget. UNRWA emergency programmes and key projects, also operating with large shortfalls, are funded through separate funding portals.

UNRWA is a United Nations agency established by the General Assembly in 1949 and mandated to provide assistance and protection to some 5 million registered Palestine refugees. Its mission is to help Palestine refugees in Jordan, Lebanon, Syria, West Bank and the Gaza Strip achieve their full human development potential, pending a just and lasting solution to their plight. UNRWA services encompass education, health care, relief and social services, camp infrastructure and improvement, protection and microfinance.