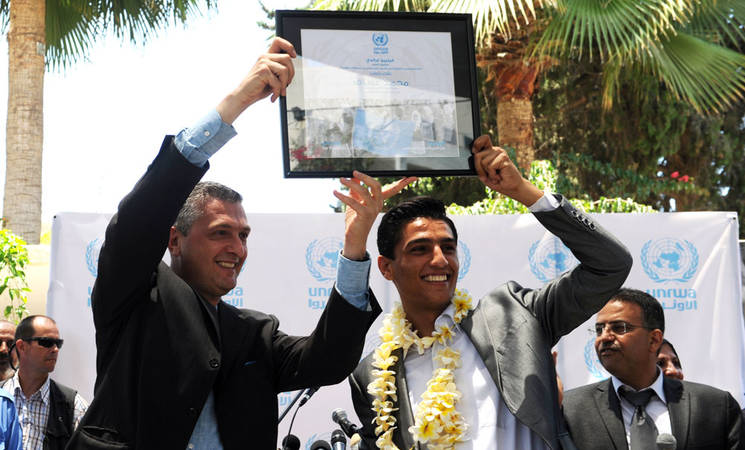 The Commissioner General of UNRWA, Filippo Grandi, welcomed Arab Idol winner, Mohammad Assaf, to UNRWA headquarters in Gaza, and thanked him for accepting the role of UNRWA’s first ever “Regional Youth Ambassador for Palestine Refugees”. Speaking in front of hundreds of UNRWA staff, Grandi said Mohammad  “had  brought us all together in a rare moment of celebration”.
Mohammad had accepted the UNRWA appointment well before his final victory in Beirut “without hesitation”, saying that he was determined to serve UNRWA and the Palestine refugees “as best he could”.
During the meeting in Gaza, Mohammad Assaf said “I am extremely proud for being named UNRWA’s youth ambassador for Palestine refugees. I give my solemn promise to UNRWA and the refugee youth to be an effective representative to them”.
Grandi  added, “we are all truly proud that a young man who received his education in an UNRWA school in the Khan Younis refugee camp in Gaza and whose family has a long association with UNRWA has emerged onto the world stage to such universal acclaim. His golden voice speaks to and for all of us. He is indeed an ambassador: for his generation and for his people. It with great joy that I can say to you all, he is now also an UNRWA ambassador for Palestine Refugees.
– Ends –
Background Information: