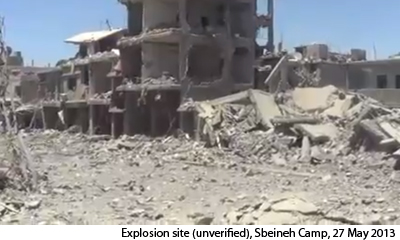 The United Nations Relief and Works Agency for Palestine Refugees (UNRWA) has learned of a large explosion in Sbeineh Camp, Damascus Governorate, on 27 May, 2013. Early reports suggested that the explosion was caused by a ground-to-ground missile or airstrike. This could not be verified as Sbeineh Camp remains inaccessible due to ongoing armed conflict in the area. UNRWA condemns this attack which claimed the lives of at least five Palestine refugees. A further eight were wounded and dozens of refugee homes were reportedly destroyed.

Palestine refugee camps and neighbourhoods continue to experience some of the most intense armed engagements of the Syria conflict, with casualties and deaths on a daily basis. The conduct of armed conflict in and around refugee camps and other civilian areas across Syria, coupled with the use of heavy weapons has increased in the past few months and has forced tens of thousands of Palestine refugee families to flee their homes to live as displaced people in safer parts of Syria. UNRWA now estimates that approximately 235,000 Palestine refugees have been displaced during the Syria conflict. Sbeineh Camp itself is now virtually deserted following several months of shelling and armed clashes. Those refugees that remain in the camp are typically the poorest and most vulnerable, lacking the means to relocate.

This most recent attack on a Palestine refugee camp further illustrates the grave and rapidly growing risks faced by Palestine refugees within Syria. Hopes that this community could be spared from armed violence have been shattered as armed opposition elements have taken up positions in camp after camp, in turn attracting intense military responses from government forces. In a single day at the end of April, some 6,000 Palestine refugees were compelled by similar events to flee their homes in Ein el Tal Camp in Aleppo Governorate.

In the strongest possible terms, UNRWA reiterates its demand that the Government and opposition forces comply with their obligations under international law and withdraw from or otherwise desist from conducting armed conflict in civilian areas, including in and around Yarmouk, Sbeineh, Husseiniyeh, Khan Eshieh, Seyda Zeinab, Neirab, Ein el Tal, Dera‘a and other Palestine refugee camps. UNRWA calls again on all parties to seek a resolution of the Syria conflict through dialogue and political negotiations.

Financial support to UNRWA has not kept pace with an increased demand for services caused by growing numbers of registered refugees, expanding need, and deepening poverty. As a result, the Agency‘s General Fund (GF), supporting UNRWA’s core activities and 97 per cent reliant on voluntary contributions, has begun each year with a large projected deficit. Currently the deficit stands at US$ 66.9 million.