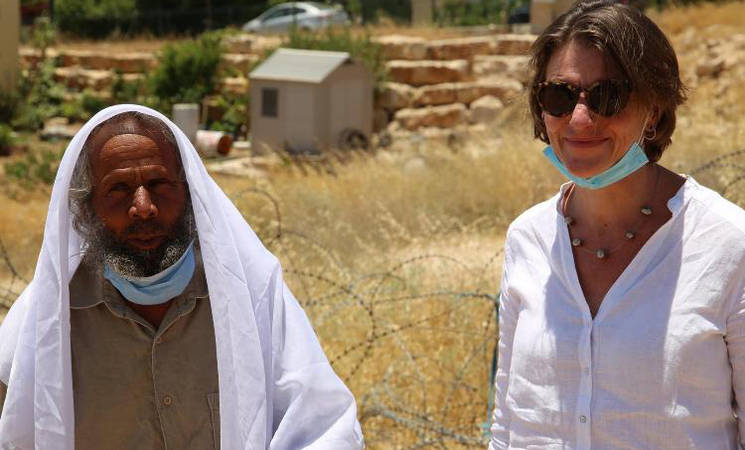 The United Nations Relief and Works Agency for Palestine Refugees in the Near East (UNRWA) in the West Bank expresses its deep concern over the conduct of the Israeli Security Forces during an operation that led to the serious injury of Suleiman Eid Hathaleen, know as Hajj Suleiman, an elderly Palestine refugee community leader from Umm al Kheir in the South Hebron Hills, on 5 January 2022.

On the afternoon of 5 January, an operation of the Israeli Security Forces (ISF) to confiscate unregistered vehicles took place in the Umm al-Kheir area. The operation was protested by the local community and, when leaving the area, an Israeli truck transporting the confiscated vehicles rammed into Hajj Suleiman, drove over him and dragged his body for several meters without stopping. Hajj Suleiman had been peacefully protesting on the road used by the ISF vehicles and would have been clearly visible to both the truck driver and the officers in the ISF jeep present at the scene. After the incident, which left the elderly man seriously injured, there is no indication that the ISF troops on the ground offered assistance at any point, having simply left the area immediately after the incident.

Hajj Suleiman is well-known for his peaceful activism and support to local communities, both locally and to numerous visitors from around the world to Umm al Kheir. Due to ISF's actions, he is now in hospital in a critical condition and it is not yet certain if he will survive the multiple serious injuries he sustained.

The international standards for law enforcement officials are grounded in the respect and protection of human dignity, aimed to maintain and uphold the human rights of all persons. The conduct of the ISF shows an evident disregard for their responsibilities vis-à-vis internal law and standards. Moreover, as an occupying force, Israeli security forces are obligated to protect the lives and ensure the dignity of all Palestinians living under their control.

UNRWA calls on the ISF to urgently investigate the incident and hold accountable those found to have violated international standards, neglected their duties, and acted in violation of the law.