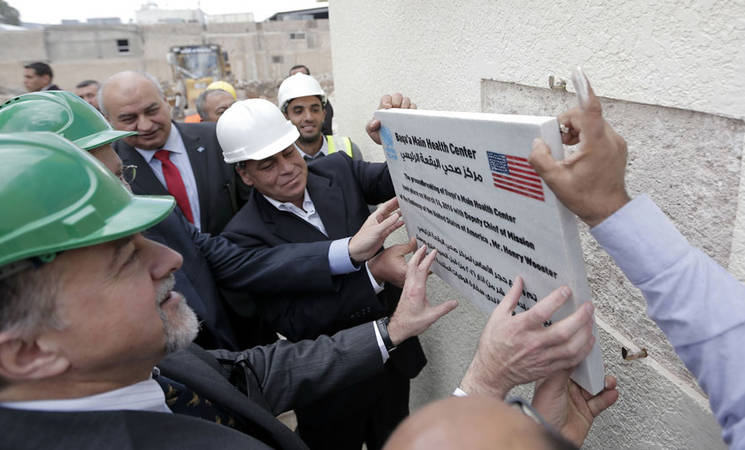 Today, UNRWA Director of Operations in Jordan Roger Davies and Deputy Chargé d'Affairs of the Embassy of United States of America Henry Wooster conducted a groundbreaking ceremony for the construction and expansion of the Baqa’a Main Health Centre.

Mr. Wooster said, “The United States remains committed to supporting Palestinian refugees in Jordan and throughout the region. We remain the largest and most consistent bilateral donor to UNRWA. The US$ 1.75 million provided by the United States to fund the reconstruction and expansion of the Baqa’a Health Centre will improve health-care services in Baqa’a while symbolizing enduring US support to the Palestinian refugee community in Jordan.”

From his side, Mr. Davies thanked the government of the United States of America for its generous donation, saying: “Baqa’a camp is the largest camp in Jordan, with more than 80,000 Palestine refugees benefiting from the Agency’s Main Health Centre alone. The construction and expansion of the Baqa’a Main Health Centre will address serious challenges pertaining to the health centre's physical condition, which adversely impacts the quality of health services provided. The new structure will create a better environment to properly address health issues among refugees, as well as to fully implement the reform in the health programme similar to that in the majority of UNRWA health centres throughout Jordan.”

The new Baqa’a Main Health Centre will replace the three existing buildings, which were built in 1987. The design of the new Health Centre takes into consideration the need for access for persons with disabilities, enhanced building safety, greening and the full implementation of the UNRWA health reform. In addition, obsolete and defective medical equipment will be replaced.

Ask the Director: Interview with the Director of UNRWA Affairs in Gaza, Matthias Schmale
The European Union Contributes Vital EUR 90 million to UNRWA
Lebanon: UNRWA calls for support for Palestine refugees, amongst the most vulnerable communities in the country
unrwa flash appeal for the covid-19 response report
rapid socio-economic study of the effects of covid-19 on palestine refugees in jordan
first 100 days and beyond: unrwa’s health response to covid-19 pandemic