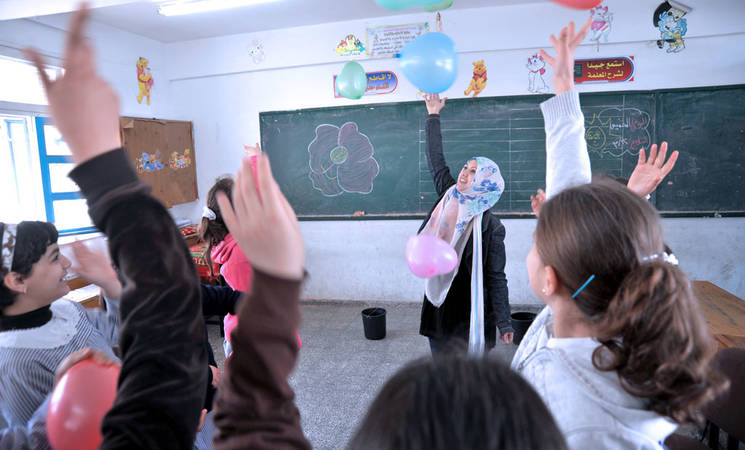 More young people in the Gaza Strip are learning how to deal with stress and trauma than ever before, according to UNRWA.

The trend towards empowering vulnerable refugee children in Gaza to better cope with the extreme challenges they face on a daily basis has seen a greater academic focus in schools and confidence in the students who have received the support, said Dr. Iyad Zaqout, the Programme Manager for the UNRWA Community Mental Health Programme (CMHP).

As the Agency’s CMHP staff continue their work with children to provide an environment of greater acceptance and help children receive the respect and support they need to become positive, contributing members of Gazan society, Dr. Zaqout said his team had noted a decrease in disruptive behaviour amongst children involved in the counselling sessions.

The average UNRWA primary school student has lived through three cycles of renewed military conflict in the past seven years witnessing death, destruction and displacement, and  has never left the Gaza Strip, unless perhaps for medical treatment.

“We feel very relaxed and full of positive energy after being involved in such sessions,” said one fifth grade female primary school student at UNRWA elementary co/ed school B in Gaza City, who chose to remain anonymous, after participating in a group recreational session designed to help girls explore their feelings, and express and deal with their thoughts in the most effective way. “We will implement these techniques at home,” she said.

After the 2012 conflict, the Post Traumatic Stress Disorder rate among children in Gaza doubled, according to the Agency. Anecdotal evidence suggests the July/August 2014 conflict has further compounded children’s suffering.