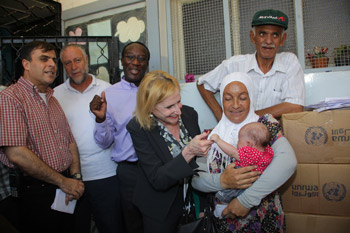 Margot Ellis, Deputy Commissioner-General of the United Nations Relief and Works Agency (UNRWA), came to Syria on 9-10 July to support the Agency’s continued humanitarian services to Palestine refugees displaced by the country’s ongoing conflict. She visited UNRWA operations and encouraged the staff, commending them for their efforts to continue delivering aid to Palestine refugees.
Ms Ellis, who coordinates the Agency’s regional response to the crisis in Syria, said: “Humanitarian access to Palestine refugees in greatest need must be assured. We will continue to communicate with the international community to support our emergency response and ongoing programmes.” She explained that  UNRWA “is now providing emergency cash and food assistance, as well as critical basic health and education services.  These expanded services are crucial to ensure the well-being of Palestine refugees”.
During her time in Syria, the Deputy Commissioner-General attended a distribution of cash assistance in Damascus, and visited the UNRWA distribution centre in Zahera, where Palestine refugees from Yarmouk were collecting food baskets. At the Damascus Training Centre, home to approximately 1,500 displaced refugees, she heard refugees share stories of their suffering, displacement and growing needs, and met the staff of the Engaging Youth project, who briefed her about their work to meet the needs of youth living in conflict.
In the Jaramana refugee camp, Ms Ellis visited the UNRWA al-Rameh school, which is serving as a temporary collective shelter, and a school provided by the Government of Syria, where UNRWA is running summer classes for displaced Palestine refugee students to make up for lessons lost to conflict.  She also visited the UNRWA Haifa school in Mazzeh, which houses displaced Palestine refugees. There, refugees who completed training courses in computers and women’s and men’s hairdressing received their certificates from Ms Ellis.
The Deputy Commissioner-General appealed to all the parties to the conflict to abide by their obligations under international law and to ensure that refugee camps and UNRWA installations are safeguarded. She thanked UNRWA staff for their dedication and commitment to serving the growing needs of the Palestine refugee community in spite of the difficulties and displacement they themselves were facing, and asked them to be creative and innovative in their work on behalf of refugees.
Ms Ellis emphasized that UNRWA would continue to provide services despite the intense challenges of the situation. “UNRWA has stood beside the Palestine refugees for more than six decades, thanks to the efforts of its staff and volunteers and our partnership with the refugees themselves. We continue to stand beside them now,” she said.
– Ends –
Background information
UNRWA is a United Nations agency established by the General Assembly in 1949 and is mandated to provide assistance and protection to a population of some five million registered Palestine refugees. Its mission is to help Palestine refugees in Jordan, Lebanon, Syria, West Bank and the Gaza Strip to achieve their full potential in human development, pending a just solution to their plight. UNRWA’s services encompass education, health care, relief and social services, camp infrastructure and improvement, and microfinance.
Financial support to UNRWA has not kept pace with an increased demand for services caused by growing numbers of registered refugees, expanding need, and deepening poverty. As a result, the Agency‘s General Fund (GF), supporting UNRWA’s core activities and 97 per cent reliant on voluntary contributions, has begun each year with a large projected deficit. Currently the deficit stands at US$ 58.5 million.
For more information, please contact:
Hala Mukhles
Mobile: + 963 (0)940 888103
Email: h.mukhles@unrwa.org
Background Information: