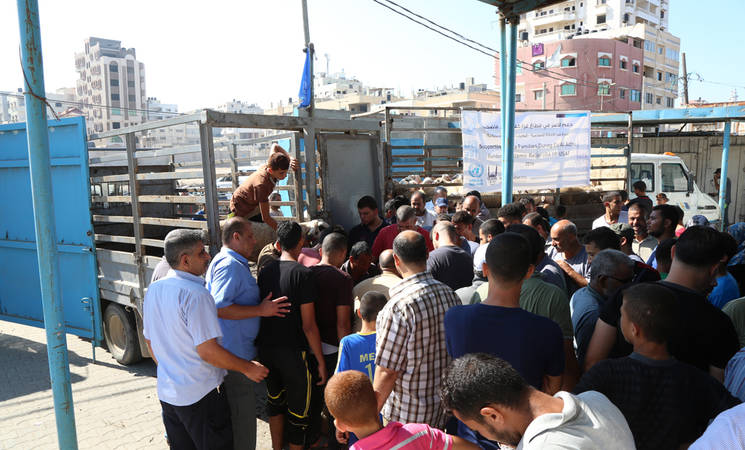 On 8 and 10 September, UNRWA distributed 695 live sheep to 2,085 Palestine refugee families, thanks to a generous contribution from Islamic Relief USA (IR USA) for the Muslim Al-Adha Eid celebration. The project was implemented in eight UNRWA Distribution Centres, and targeted abject poor beneficiaries (those household who live below US$ 1.74 per person per day) in Gaza, where one sheep can be shared between three refugee families.

Today, over 80 per cent of the population in Gaza relies on humanitarian assistance to be able to cover their basic needs, such as food, basic education, basic health care or shelter.

The blockade on Gaza, now in its tenth year, continues to cause severe socio-economic and psychosocial distress for too many people in Gaza. There is an overall decrease in the economic access to food in Gaza as a result of increased unemployment, high food prices and extreme volatility of the economy.

This project is part of UNRWA efforts to help mitigate the food insecurity among refugee families in Gaza and enable them to celebrate Eid at a time of increasing poverty levels in Gaza.

IR USA has generously contributed US$ 250,000 for the Al-Adahi project during Eid, and a total of US$ 12.6 million to Palestine refugees in Gaza through UNRWA since 2013.