Three girls from the UNRWA School at Askar Camp in Nablus have made history by becoming the first Palestinians to win an award at the world‘s premier youth science competition. Aseel Abu Aleil, Aseel Alshaar and Noor Alarada were competing with 1500 finalists from around the world.

They picked up a "special award in applied electronics" at the Intel Science and Engineering Fair in San Jose, California.

The 14-year-olds scooped the prize for inventing an electronic "sensor cane" for the visually impaired, which for the first time sends an infrared signal downwards as well as forwards. Praising the originality of the invention, Mark Uslan, a Director at the American Federation of the Blind said: "Although various types of "laser canes" have existed since the early 1970s, the girls‘ design resolves a fundamental flaw in previous models by detecting holes in the ground."

UNRWA’s Deputy Commissioner-General, Margot Ellis said: “The girls are part of the UNRWA‘s school system which is educating 500,000 children throughout the Middle East. Unfortunately, severe financial constraints threaten the continued provision of quality education to young Palestinian refugees like these girls from Nablus. 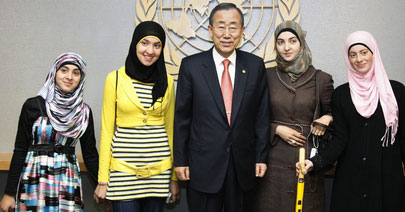 "These students show the enormous potential of Palestinian girls and boys. UNRWA in its education programmes wants to bring this out. I pay tribute to them and their teachers. It makes me wonder what we could achieve if our education system were not in the midst of a cash crisis."

UNRWA Spokesperson, Chris Gunness, explained: "UNRWA‘s science education costs 25 million dollars a year and with a 90 million dollar deficit across the Agency our funds will run out in a matter of months. In Gaza, we have had to turn thousands of children away from our schools this year."