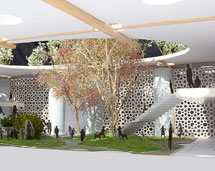 The United Nations Relief and Works Agency, UNRWA, has unveiled a groundbreaking pilot initiative to build as many as 20 “environmental zero impact” schools in the Gaza Strip. The blueprint will be showcased by UNRWA at the forthcoming UN Climate Change Conference in Durban, South Africa.

“This project is a first for UNRWA, which we hope will lead to the creation of environmentally friendly schools in the five areas where we work,” said UNRWA Commissioner-General, Filippo Grandi, “not just in Gaza, but also in the West Bank, Jordan, Lebanon and Syria. We teach half a million students throughout the Middle East region. UNRWA is grateful to the Kuwait Fund, which is funding the pilot school through the Islamic Development Bank. We hope that all donors will come forward as this exciting initiative moves ahead.”

UNRWA is partnering with world-renowned, award-winning architect Mario Cucinella, who has blazed a trail in developing green architectural design and technology. 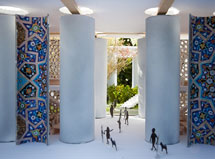 “With its huge outreach in the Middle East, UNRWA is an ideal partner for this project,” said Cucinella, “which is about improving living conditions for Palestine refugees with better access to water and energy, and with as little impact as possible on the Gaza environment, which has been so badly degraded by decades of conflict and blockade”.

At a cost of US$ 2 million, about the same cost of a regular UNRWA school, the new green school provides educational facilities for 800 students in an atmosphere conducive to the highest levels of academic achievement. While promoting high academic standards within, this concept also promotes high levels of respect for the environment outside, as it is entirely “off grid” and self sustaining. It is a concept based on the latest state-of-the-art green technology.