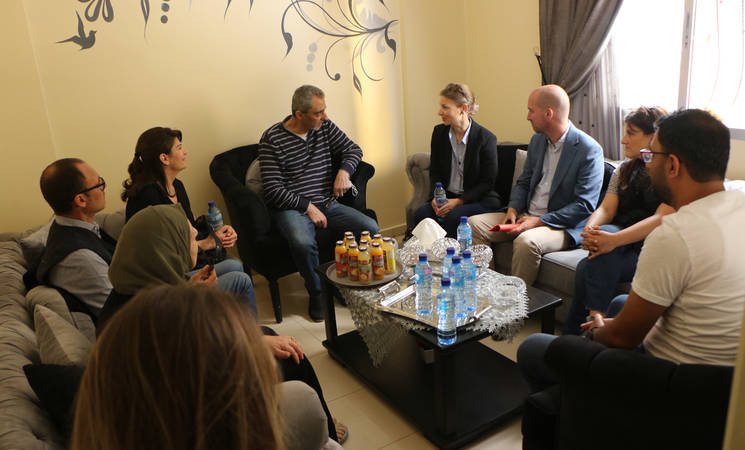 A high-level delegation visited Nahr el-Bared Camp (NBC), including Ambassador of Italy to Lebanon, H.E. Mrs. Nicoletta Bombardiere, Ambassador of Norway to Lebanon, H.E. Mr. Martin Yttervik, and Deputy Head of Mission of the Swiss Embassy in Lebanon, ​​Mrs. Maja Messmer Mokhtar. The delegation also included the Director of the Italian Agency for Development Cooperation (AICS), Ms. Alessandra Piermattei, Head of the Development Cooperation Section of the Swedish Embassy in Lebanon, Mr. Christoffer Burnett-Cargill, and other diplomats. The visitors were accompanied by the Director of UNRWA Affairs, Lebanon, Mr. Claudio Cordone.

The delegation was briefed on the ongoing reconstruction process and the challenges the effort faces. They visited reconstructed buildings in Block 38, where they met two families who returned recently to their reconstructed houses and discussed with them their living conditions. The families expressed their satisfaction with moving to their new houses, noting that this has lifted the burden of rental costs, and expressed hope that the remaining displaced families would be able to return to their houses very soon.

The delegation also met with a group of young Palestine refugees from Lebanon and Syria, who spoke about their studies and concerns about the lack of job opportunities and uncertain futures. They also pointed out the restrictions imposed on their rights, especially the right to work, and the hopelessness which drive many Palestine refugee youth to consider emigrating regularly or irregularly despite the risk this may entail.

The delegation expressed its support and commitment to Palestine refugees and UNRWA, despite the financial challenges they face especially due to other crisis and the war in Ukraine. They called on young people to continue with their education despite the difficulties because education provides hope for a better future. The visit ended with a meeting with representatives of the Palestinian community, who discussed with the delegation the need to complete the reconstruction of NBC as well as the difficult living conditions of Palestine refugees in Lebanon in general. They called on donor countries to increase their support to UNRWA and Palestine refugees as Lebanon continues to be affected by the ongoing economic crisis.