Home » Newsroom » Press Releases » UNRWA inaugurates a Health Centre in Jordan, donation from the Saudi Fund for Development
Back to Newsroom

UNRWA inaugurates a Health Centre in Jordan, donation from the Saudi Fund for Development 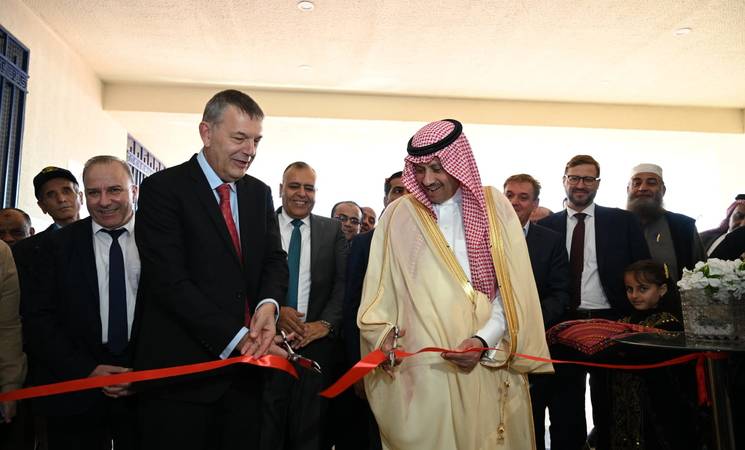 A health centre to serve 300,000 Palestine refugees in Jordan was opened in Zarqa camp northeast of Jordan today. The event was attended by the Ambassador of the Kingdom of Saudi Arabia to Jordan, His Excellency Mr. Nayef bin Bandar Al-Sudairy, the Commissioner-General of the United Nations Relief and Works Agency for Palestine Refugees in the Near East (UNRWA), Mr. Philippe Lazzarini, the Director- General of the Department of Palestinian Affairs, H.E. Eng. Rafiq Khirfan, and the Governor of Zarqa Governorate, H.E. Mr. Hasan al-Jbour.

The new health centre was constructed thanks to a donation of nearly US$ 2 million through the Saudi Fund for Development (SFD) while the Government of Jordan donated the land. The centre will provide accessibility for persons with disabilities and includes green spaces, a children’s play area, and sun-shaded spaces.

Speaking at the ceremony, His Excellency Mr. Al-Sudairy said, "The Kingdom of Saudi Arabia is a pioneer in humanitarian work, with the aim of alleviating human suffering around the world, in cooperation with the United Nations and international organizations.” He continued, “The Kingdom is fully supportive of Palestine refugees, including through our partnership with UNRWA, and its services.”

As part of the ceremony, H.E Mr. Al-Sudairy, and the Commissioner-General of UNRWA, Mr. Lazzarini, took a tour inside the health centre’s facilities, where they engaged with health centre staff and Palestine refugee patients.

I would like to extend my appreciation to Saudi Arabia for its historic support to UNRWA. This contribution embodies the Kingdom's solidarity with Palestine refugees throughout their plight. The construction of this health centre is a critical investment that will serve thousands of Palestine refugees residing both inside and outside Zarqa camp,” said the Commissioner-General Lazzarini. “I also welcome the recent contribution of US$ 27 million from KSA in support of UNRWA core services, as the Agency faces a critical funding shortfall this year” he continued.

Zarqa camp is the oldest Palestine refugee camp in Jordan. One of the four camps established in the country to accommodate the refugees who left Palestine as a result of the 1948 Arab-Israeli war, it was set up near the town of Zarqa by the International Committee of the Red Cross in 1949. It originally housed 8,000 refugees in an area of 0.18 square

The United Nations General Assembly established UNRWA in 1949 with a mandate to provide humanitarian assistance and protection to registered Palestine refugees in the Agency’s area of operations pending a just and lasting solution to their plight. UNRWA operates in the West Bank, including East Jerusalem, The Gaza Strip, Jordan, Lebanon and Syria.

Tens of thousands of Palestine refugees who lost their homes and livelihoods due to the 1948 conflict continue to be displaced and in need of support, nearly 75 years on. UNRWA helps Palestine Refugees achieve their full potential in human development through quality services it provides in education, health care, relief and social services, protection, camp infrastructure and improvement, microfinance, and emergency assistance. UNRWA is funded almost entirely by voluntary contributions.