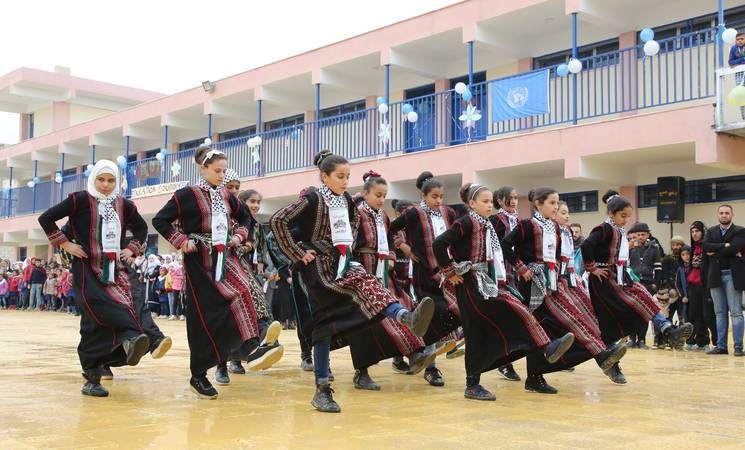 Completely destroyed by conflict in 2012, the school was rebuilt and equipped with a generous contribution from the Kingdom of Saudi Arabia (KSA) through the Saudi Fund for Development (SFD).

The newly constructed two story-building is now equipped with 10 classrooms, an administration and teachers’ rooms, as well as two storage rooms. The school now provides a safe school environment for some 750 Palestine refugee students.

The inauguration was attended by the Director of UNRWA Affairs in Syria, Mr. Amanya Michael-Ebye, the Deputy Director of UNRWA Affairs Operations & Support, Mr. Ram Trivedi, the Deputy Governor of Dera’a, Mr. Abdoh Abu Khashreef and the Director-General of the General Authority for Palestinian Arab Refugees (GAPAR), Mr. Ali Mustafa. Also in attendance was UNRWA staff and representatives of the local community.

During the conflict the students attended classes in apartments provided by GAPAR and the local community members. This ensured that students were provided with an uninterrupted schooling schedule, despite their challenging surrounding environment.

Underscoring the cooperation between the Governorate of Dera’a, UNRWA and the local community, Mr. Abdoh Abu Khashreef said, “We in the Governorate are ready to cooperate with UNRWA in support of Palestine refugees. We will not hesitate to provide services to Dera’a camp within our Governorate’s available resources.”

Mr. Mustafa, thanked UNRWA and the Syrian Arab Republic for their continued and generous support to Palestine refugees. “Syria has relentlessly stood by Palestine refugees, with great attention to health, education and other services,” he said.

Dera'a refugee camp is located inside Dera’a City, in southern Syria. Palestinian refugees came to the Dera’a area in two waves in 1948 and in 1967. Dera’a camp was home to 10,500 Palestine refugees before 2011. Dera’a camp and its surroundings returned to government control in the summer of 2018. The camp is now largely destroyed. UNRWA was able to return to Dera’a camp in November 2018 to conduct a needs assessment.  Inside Dera’a camp, all premises including three school buildings and a clinic need substantial repairs or complete rebuilding.

As of February 2020, some 770 Palestine refugee families have returned to their homes.