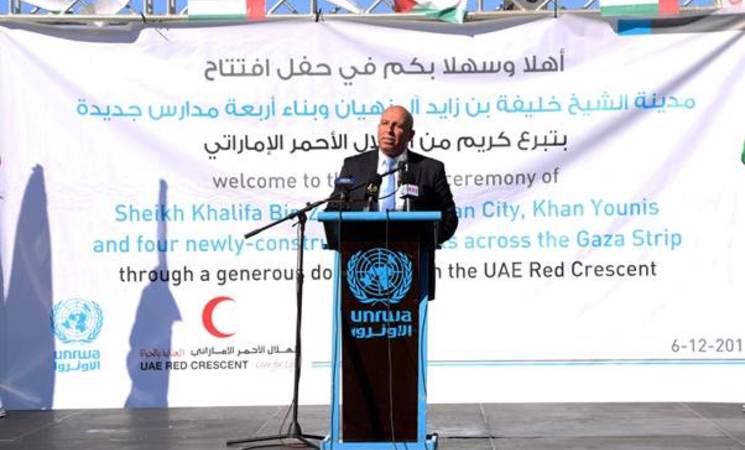 The United Nations Relief and Works Agency for Palestine Refugees (UNRWA) on 6 December 2016 inaugurated Sheikh Khalifa Bin Zayed Al Nahyan City in Khan Younis, as well as four new schools in Gaza. The housing project was funded through a generous contribution of US$19.7 million from the United Arab Emirates Red Crescent (UAERC). A total of 4,000 Palestine refugee persons will benefit from 600 new housing units prepared to re-house refugee families who were living in poor and inadequate shelters. The project started in 2007 and was halted for almost 5 years due to the Israeli blockade and conflicts in Gaza.

The four schools that were inaugurated at the ceremony represent Phase 1 of a generous contribution of US$ 8 million from the United Arab Emirates Red Crescent (UAERC). The total project foresees the construction of a total of eight schools.

“This project is very significant for Palestine refugees, it is very large and comprehensive, with infrastructure, electricity network, a school and a water well, ” said Melinda Young, Director of UNRWA Operations (Officer-in-Charge) in Gaza.  “It’s also a realization of a fundamental human right: the right to a dignified life for Palestine refugees in Gaza. Again, we acknowledge our generous donor for helping make this happen,” she added.

Speaking on behalf of the UAERC, Mr. Sufian Abu Zayd, the UAERC representative in Gaza, said, “The UAERC has always been and will continue to be a great supporter of the Palestinian people in Gaza.  What really matters for the UAE Red Crescent is to help and support refugee families in Gaza in time of need and during times of emergencies.”

The event was attended by Mr. Mufeed Al Hasayna, Minister of Public Works and Housing, governor and mayor of Khan Younis, in addition to a number of notables and dignitaries, as well as members of the local community .

Ask the Director: Interview with the Director of UNRWA Affairs in Gaza, Matthias Schmale
To enjoy life is to be in good health
Mercy USA supports Palestine refugee families in Gaza with emergency food aid
The Rahmatan Lil Alamin Foundation and the People of Singapore Raise US$ 3.18 Million for Palestine Refugees
oPt emergency appeal - progress report
gaza’s “great march of return”, one year on
Occupied Palestinian Territory Emergency Appeal 2019