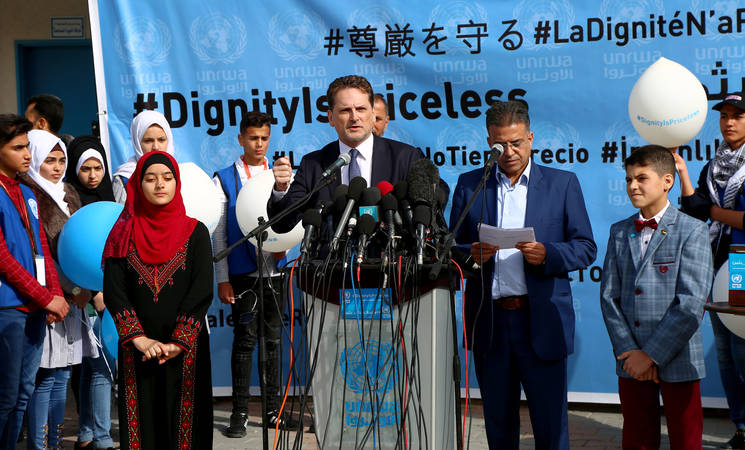 Today, hundreds of school children in Gaza gathered with the Commissioner-General of the United Nations Relief and Works Agency (UNRWA), Mr. Pierre Krähenbühl, to launch the global fundraising campaign #DignityIsPriceless.

The campaign follows the dramatic reduction of funding announced by the United States last week. It aims to raise US$ 500 million.

"We are launching this campaign because UNRWA stands with you as witnesses to your historic plight," stated Krähenbühl during a press conference at an UNRWA school in Gaza. “I wish to confirm to all Palestine refugees that UNRWA schools, proud schools like the one we are standing in, will remain open. Health care, and other services will be provided. It is a huge challenge, but it is absolutely imperative.”

This reduction in funding could have a significant impact on the daily lives of millions of vulnerable Palestine refugees across Jordan, Syria, Lebanon, Gaza, and the West Bank including East Jerusalem. At stake is access to basic education for 525,000 boys and girls at over 700 UNRWA schools; emergency food and cash assistance to 1.7 million extremely vulnerable Palestine refugees; access to primary health care for 3 million refugees, including pre-natal care; dignity and human security for 5.3 million refugees who endured 70 years of injustice and uncertainty.

"Today I wish to tell the world that our education is at risk. We are proud and determined students,” stated 13 year-old Karim, President of UNRWA Student Parliament. “We want the world to support us in becoming global citizens and pursue our dreams and aspirations."

Eslam, a member of UNRWA Student Parliament, called on students around the world to join the campaign. "We are determined students and I call on students in Africa, Asia, Europe, Latin and North America, as well as in the Middle East to echo our appeals for support. Help keep UNRWA schools open!"

The Commissioner-General reassured refugees that UNRWA’s mandate is firmly protected in the UN General Assembly. “It is not for sale and was just extended by 167 countries,” he said.

Krähenbühl urged "all people of good will, all institutions, members of the Palestinian diaspora, private companies, and foundations to join us."

As Karim placed his savings into a donation box, he appealed to the world to #FundUNRWA.  “Every contribution counts so I am making the first step,” he said.