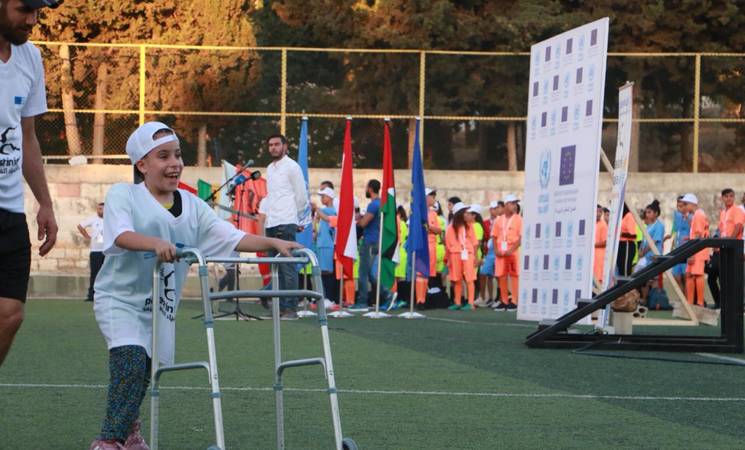 The United Nations Relief and Works Agency for Palestine Refugees in the Near East (UNRWA) launched the 11th Palestiniadi (Palestinian Olympics) with the support of the European Union Regional Trust Fund in Response to the Syrian Crisis, the EU‘MADAD’ Fund, for the second year in a row. The event brings over 285 Lebanese nationals, as well as Palestine refugees from Syria and Lebanon, including 20 students with disabilities, for three days of fun, games and competition. The Palestiniadi takes place between 4-7 July in the Siblin Training Centre, Lebanon.

Director of UNRWA Affairs in Lebanon, Claudio Cordone, lit the Palestiniadi torch and wished all participants a fun and fair competition experience. In attendance were representatives of the EU Delegation to Lebanon, the Palestinian Embassy in Lebanon, the Mayor of Siblin, participating students’ families as well as community representatives, in addition to teachers, parents and students.

Thanking the European Union for its support to UNRWA, Mr. Cordone said, “The EU continues to be a critical partner for UNRWA in supporting Palestine refugee youth and today’s event is a great example of bringing youth together through sports. The EU has been one of our most reliable donors for decades. UNRWA can count on the support of the EU to overcome the unprecedented challenges it faces.”

Rania Chehadi one of the students participating in the event said: “I am very happy to be here, it is a great opportunity to practice my favourite sport and to meet new friends from different areas, I’m very excited and will try to enjoy every single moment during the competitions.”

The students will compete in six different collaborative and competitive games including football, volleyball, basketball, running, table tennis and chess. The closing day of the games will include a prize giving ceremony for Palestiniadi participants and winners, recognizing their efforts and sporting sprit.

This 11th Palestiniadi event exemplifies community-youth cooperation, with the aim of furthering common values of fairness, tolerance and teamwork.

About the EU Regional Trust Fund in response to the Syrian crisis, the EU 'Madad' Fund:

Since its establishment in December 2014, a significant share of the EU’s non-humanitarian aid for Syria’s neighbouring countries is provided through the EU Regional Trust Fund in Response to the Syrian Crisis, the EU 'Madad' Fund. The Trust Fund brings a more coherent and integrated EU aid response to the crisis and primarily addresses longer term economic, educational, protection and social needs of Syrian refugees in neighbouring countries such as Jordan, Lebanon, Turkey and Iraq, and supports overstretched local communities and their administrations. Today, the EU Regional Trust Fund is also one of the key instruments through which the new EU partnership priorities with Jordan are implemented.