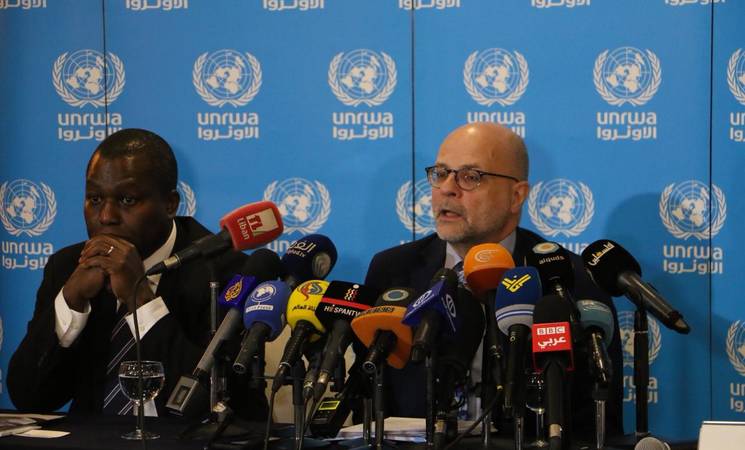 The United Nations Relief and Works Agency for Palestine Refugees in the Near East (UNRWA) today launched its 2019 Syria Regional Crisis Emergency Appeal (Syria Appeal) totaling US$ 276.9 million. Funds raised for by this appeal will provide vital life-saving humanitarian assistance to Palestine refugees in Syria, Jordan and Lebanon who continue to face significant humanitarian and protection needs.

After eight years of conflict, intense hostilities and violence resulting in deaths and injuries, internal displacement, loss of livelihoods, decreases in the provision of public services, and extensive damage to civilian infrastructure continue to disrupt the lives of civilians and severely undermine coping mechanisms.  Of the estimated 438,000 Palestine refugees remaining inside Syria, 60 per cent have been displaced at least once since the start of the conflict and a third have had their homes damaged or destroyed. Over 120,000 Palestinian refugees from Syria (PRS) have fled the country, including over 28,000 currently present in Lebanon and 17,719 in Jordan, where many of them face a precarious and marginalized existence due to their uncertain legal status and limited social protection mechanisms.

In 2018, UNRWA was confronted with the largest financial deficit in its history, which also affected the funding of the 2018 Syria Appeal and consequently the delivery of humanitarian services to mitigate the consequences of the Syria regional crisis.   For example, both the frequency and of cash assistance rounds to the most vulnerable Palestine refugees in Syria and Jordan had to be scaled back.

In the wake of this dramatic budgetary crisis, the UNRWA donors and partners mobilized in a powerful show of solidarity with Palestine refugees and the Agency’s “Dignity is Priceless” fundraising campaign which allowed the Agency to nearly close the financial gap by the end of the year and continue its service delivery uninterrupted. “Despite the challenging operating environment, UNRWA will continue to adapt its interventions to meet the vital needs of Palestine refugees who have been affected by the conflict. Palestine refugees remain one of the most vulnerable groups in Syria and across the region and the Agency will continue to provide emergency assistance to help them meet their basic needs,” said Director of UNRWA Operations in Syria Mohammed Abdi Adar.

Under the Syria Appeal, UNRWA requires US$ 157 million to provide emergency cash assistance, non-food items and food assistance to the more than 484,000 Palestine refugees directly affected by the conflict in the region. The appeal will provide emergency cash assistance to 418,000 Palestine refugees in Syria, 28,800 PRS in Lebanon and 18,500 PRS in Jordan. UNRWA requires a further US$ 83 million to provide life-saving emergency health-care, education, protection and livelihood opportunities for Palestinian refugees affected by the Syrian conflict across the region.

The Commissioner-General of the United Nations Relief and Works Agency (UNRWA), Pierre Krähenbühl, highlighted the Agency’s unique position in the region and said: “The Agency’s role as a lifeline for Palestine refugees is one of great responsibility. I will strive to raise the funds required to honour this trust. The world showed its support for Palestine refugees last year. Now it is time to renew that support and stand with the Palestine refugee communities most ravaged by the conflict in Syria.”