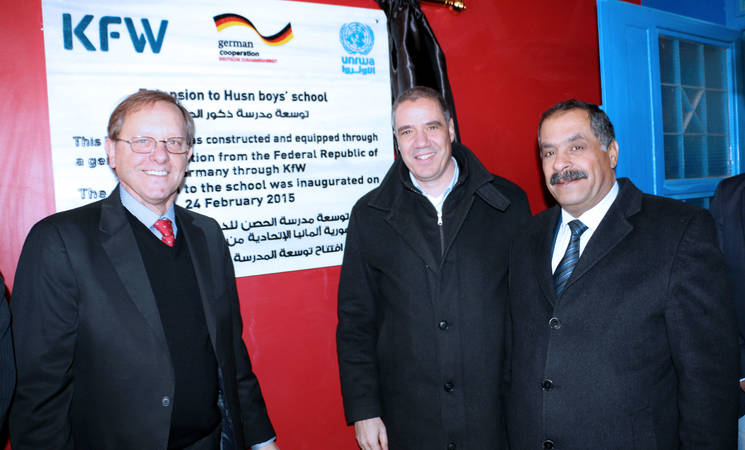 H.E. the Ambassador of the Federal Republic of Germany to Jordan, Ralph Tarraf, and the Director of UNRWA in Jordan, Roger Davies, opened the extension to Husn Preparatory Boys School in the Palestine refugee camp of Husn, in northern Jordan, on 24 February. The inauguration ceremony was attended by the Director General of the Department of Palestinian Affairs Mahmoud Akrabawi, a delegation from KfW Entwicklungsbank, refugee notables and beneficiaries.

Speaking at the ceremony, Ambassador Tarraf said, “Construction of a school means looking to the future. It is a sign of hope; hope fora better future, hope in educating your children for a better life opportunity that is full of pride and dignity, fulfilling the right to decide your destiny.”

Thanking the Federal Government of Germany for its generous contribution, Mr. Davies said, “The construction of the extension to boys’ and girls’ schools and shelter rehabilitation at Husn camp are the upshot of extensive discussions with the local community in the camp. These vital projects came first on the camp priority list developed by UNRWA and the Palestine refugees themselves.”

The school extension forms part of three projects UNRWA is implementing in Jordan funded by the Federal Government of Germany through KfW and under the Regional Programme to Improve Living Conditions in Palestine refugee camps (REPAC). The projects include the construction of extensions to the boys’ and girls’ schools in Husn camp and reconstruction of 80 shelters in Talbieh camp and 57 shelters in Husn camps.  All projects were chosen after consultations and meetings between the UNRWA Infrastructure and Camp Improvement Programme and local communities in the respective camps.