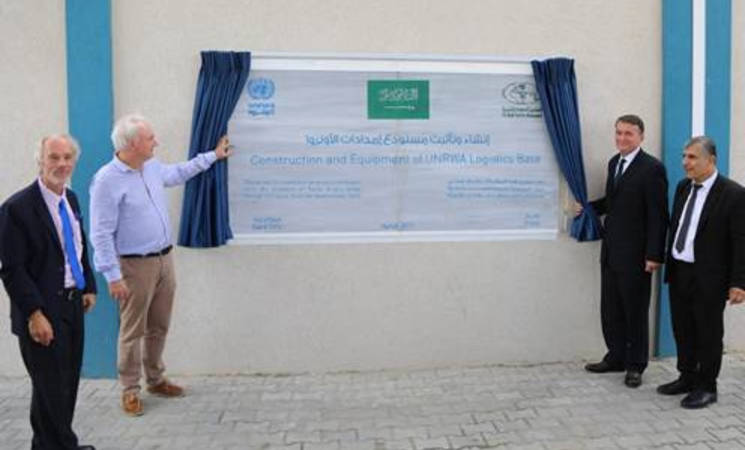 The United Nations Relief and Works Agency for Palestine Refugees in the Near East (UNRWA) yesterday officially opened its new logistics base in Rafah, which is the largest of its kind in the Gaza Strip. The ceremony was attended by Christian Saunders, the newly-appointed UNRWA Deputy Commissioner-General, Matthias Schmale, Director of UNRWA Operations in Gaza, and other senior UNRWA staff.

The base will serve as logistics hub for UNRWA operations in Gaza’s southern governorates and as the main warehouse for the storage of basic food, which the Agency distributes to approximately one million refugees on a quarterly basis, as well as emergency non-food items and medicines.

“It is my great pleasure to return to Gaza after so many years and to attend the official opening of the Rafah Logistics Base today,” said Christian Saunders, who returned to UNRWA in his new capacity as Deputy Commissioner-General after having started his UN career in Gaza in 1989. “We are very grateful for the support to UNRWA and Palestine refugees extended by the Kingdom of Saudi Arabia and the Saudi Fund for Development. The new logistics base is just one of many examples of the strategic and forward-looking nature of our partnership and commitment of supporting Palestine refugees in Gaza.”

“The completion of this project, which is truly impressive in its scale and scope, is an important milestone for UNRWA and will have an important impact on the Agency’s operations in support of Palestine refugees,” said Schmale. “Our sincere thanks goes to everybody involved in funding, planning, implementing and leading this project to its successful completion.”

As of today, the Kingdom of Saudi Arabia has contributed more than US$ 800 million to UNRWA. Over the past three years, it has become the Agency’s third largest donor. Since 2005, it has also been a valued member of the UNRWA Advisory Commission which advises and assists the Commissioner-General in carrying out the Agency’s mandate.

Accompanied by the Director of UNRWA Operations in Gaza, the Deputy Commissioner-General also visited a newly-constructed school in Rafah, which was built using an innovative, environmentally friendly and child-centred design and which can serve as an emergency shelter for internally displaced people during times of conflict, as well as the Agency’s Technical and Vocational Training College in Khan Younis, and Bureij Health Centre in the Middle Area.

If others can do it, I can too
On the record response to the IDF closing the criminal investigation into the shelling near the UNRWA school in Rafah, Gaza on 3 August 2014