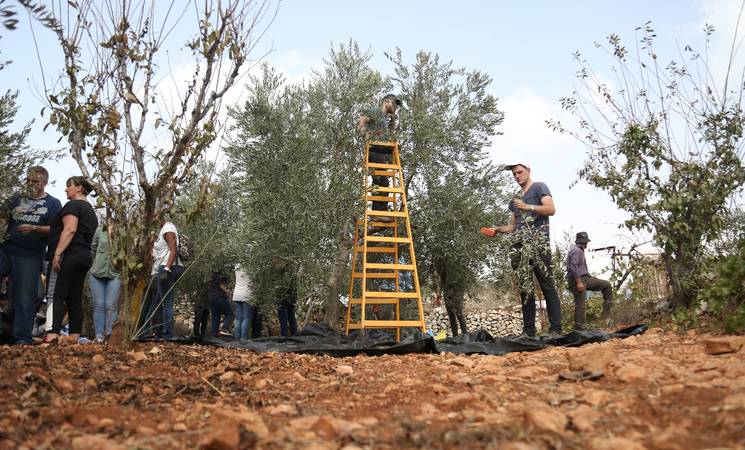 The United Nations Relief and Works Agency for Palestine Refugees in the Near East (UNRWA) organized an olive picking event last Thursday in solidarity with Palestine refugee farmers in the village of Beit Surik, located north of Jerusalem. Beit Surik is surrounded on almost sides by illegal Israeli settlements. After the construction of the Barrier, Beit Surik residents were confronted by checkpoints, limiting access for some 5,000 residents. Movement restrictions and the Barrier have shattered the economy of this formerly prosperous area.

This year, some seventy UNRWA staff members attended the harvest event to stand in solidarity with the Palestine refugee community of Beit Surik. Staffers experienced firsthand some of the daily challenges and difficulties residents endure. Together with thirty local farmers, UNRWA staff harvested olives for several hours.

Olive harvest season is an important opportunity to highlight the impact of settlements and the Barrier on Palestine refugees and their quality of life. The event was held to illustrate the humanitarian impact of access restrictions and severely limited water resources on their livelihoods. Residents of Beit Surik are also subject to increasingly frequent instances of settler violence. Often residents of the village risk their physical safety to harvest their crops.

The Head of the Beit Surik Village Council, Mr. Radi Jaber expressed his appreciation to the Agency for this initiative. He also highlighted the difficulty many of them faced when they tried access their lands this season: “This year, Israeli authorities banned 367 farmers from access through the eastern and western gates. This is where many of their olive trees are located. They have denied us access lands almost 2,000 dunums in size.”

Acting Director of UNRWA Operations, West Bank Ms. Kelly McBride said: “This event gives me the opportunity to state a very important point about the Agency’s operations, that being the support UNRWA provides to all Palestine refugees across the West Bank, both inside and outside camps. One of the biggest challenges to Palestine refugees in the West Bank is limited access to their lands, and subsequently the severe threat to the sustenance of their livelihoods. We are here today to shed light on this issue, to advocate that these conditions are changed and that the rights of Palestine refugees are respected in accordance with international law.”

Also during the event farmers shared their stories of loss. Many Beit Surik farmers have lost their olive trees to settler attacks and violence.

Since 2014 UNRWA, through its Olive Harvest Initiative, has provided harvesting tools to Palestine refugee farmers in thirty vulnerable communities throughout the West Bank.