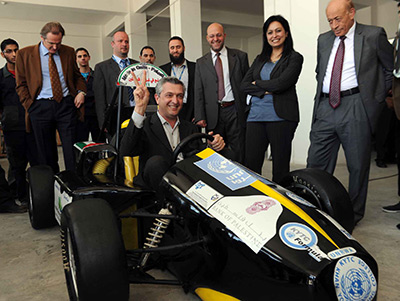 UNRWA Commissioner-General Filippo Grandi met today with young Palestinians in Khan Younis, southern Gaza, exactly one year after the Agency declared a special set of commitments to Palestine refugee youth.
At a session in the Agency’s vocational training centre for young people in Khan Younis, southern Gaza, Grandi spoke to a room packed with young Gazans about the progress of the Agency’s ten “youth commitments.” These were established last year at an important conference in Brussels: “Engaging Youth: Palestine Refugee Youth in a Changing Middle East”.
Today’s audience included the young Gazans who participated in the conference, the winners of UNRWA’s 2012 photography competition for young Palestinians, the Khan Younis training centre’s top graduates, and the team of young UNRWA mechanics who famously built a Formula 1-style car out of recycled parts. The mechanics also took Grandi for a test-drive of the Gaza-built vehicle.
“I’m happy and proud to be here at UNRWA’s Khan Younis training centre – one of the places that shows that UNRWA is serious about giving opportunities to young refugees”, Grandi said. "Despite the problems that Palestine refugee youth face, young girls and boys are given an opportunity to express their creativity in different ways."

Youth – defined as those between 15 and 30 years old – amount to nearly 42 per cent of the five-million-strong Palestine refugee population. UNRWA has identified Palestine refugee youth as a particularly vulnerable and disadvantaged group within the refugee population. For many of the current generation of young Palestine refugees – the largest in history – hopes of further improvements in quality of life and opportunities for prosperity are giving way to frustration and marginalisation, as youth in general face momentous and unprecedented challenges in their quest to make a successful transition to adulthood.
In March 2012, UNRWA convened “Engaging Youth: Palestine Refugee Youth in a Changing Middle East” with host and donor countries, youth representatives, private partners, NGOs, and UN agencies to discuss their concerns in a frank, open way. At the close of the event, Grandi unveiled an agenda of ten thematic youth commitments  which would guide UNRWA’s work for the year to come.

At today’s event, Grandi said that the Agency was working hard to put into practice the commitments it had made to young Palestine refugees one year ago. The measures taken include the improvement of training and skills development for young people, improved employment initiatives and career guidance, the development of a new family health approach addressing the needs of young people and the promotion of creative thinking among youth. Throughout the region, UNRWA was focusing on helping young Palestine refugees to increase the awareness of and advocate for their rights, he said.
Grandi also said that that UNRWA would be making a special effort to allow young refugees to participate in the in the Agency’s decision-making process.

UNRWA is a United Nations agency established by the General Assembly in 1949 and is mandated to provide assistance and protection to a population of some 5 million registered Palestine refugees. Its mission is to help Palestine refugees in Jordan, Lebanon, Syria, West Bank and the Gaza Strip to achieve their full potential in human development, pending a just solution to their plight. UNRWA’s services encompass education, health care, relief and social services, camp infrastructure and improvement, and microfinance.
Financial support to UNRWA has not kept pace with an increased demand for services caused by growing numbers of registered refugees, expanding need, and deepening poverty. As a result, the Agency‘s General Fund (GF), supporting UNRWA’s core activities and 97 per cent reliant on voluntary contributions, has begun each year with a large projected deficit. Currently the deficit stands at US$ 67.2 million.
For more information, please contact :
Background Information: