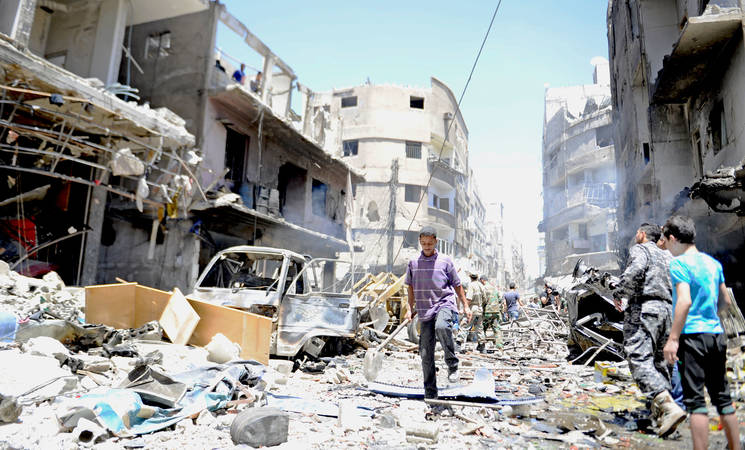 The United Nations Relief and Works Agency for Palestine Refugees (UNRWA) strongly condemns the parties responsible for two explosions in the vicinity of Qabr Essit Camp in the town of Sayyida Zeinab on 11 June 2016. One explosion claimed the lives of 14 civilians and injured over a hundred.

This is the fourth such attack in Sayyida Zeinab since January this year. A pattern has emerged of the deliberate targeting of civilians in this area. The perpetrators of these outrageous acts deserve the strongest denunciation. UNRWA staff express their sincere condolences to the bereaved Syrian and Palestinian families.

At approximately 10.30 hrs on 11 June, an explosion was triggered approximately 200 meters from the entrance of Qabr Essit camp, killing at least 14 civilians including five Palestine refugees. Of those injured, many remain in a critical condition. Minutes after the first explosion, a second device was detonated on the road between Sayyida Zeinab and the nearby town of Husseiniyeh. At this stage, no casualties have been reported from the second blast.

On 31 January 2016, three coordinated explosions in Sayyida Zeinab resulted in the death of 35 civilians and injured 150. On 24 February, another attack took the lives of 134 people, including 31 Palestine refugees. A third bombing took place on 25 April and killed at least seven civilians, and wounded dozens.

The incidents on 11 June took place in a broader and deeply concerning context of significant escalation of the armed conflict in several areas in Syria, including Aleppo governorate and rural Damascus. During the first week of June, two Palestine refugees were killed and a third was injured in Aleppo city. The lives and safety of Palestine refugees in Khan Eshieh camp in southern rural Damascus continue to be gravely endangered by recurrent armed conflict involving the frequent use of artillery.

The deliberate targeting of civilians, including Palestine refugees, is prohibited by international law and must cease. It is imperative that all sides respect and comply with their international humanitarian law obligations to protect civilians.

Background on the security situation in Sayyida Zeinab

Qabr Essit Camp, 15km from Damascus, was established in 1948, in the town of Sayyida Zeinab. Today, the camp is home to approximately 16,000 Palestine refugees, many of whom had been displaced from other locations by armed violence.

The security situation in Sayyida Zeinab initially deteriorated in October 2012. The area was engulfed in armed conflict throughout the first half of 2013, causing many of its residents to seek safety elsewhere, and compelling UNRWA to suspend its education, health and other services. The situation improved in 2014, allowing close to 75 percent of the population to return to safer parts of the camp. By November 2014, UNRWA was able to fully resume its presence and services in the camp, including the distribution of humanitarian assistance, education and social services.