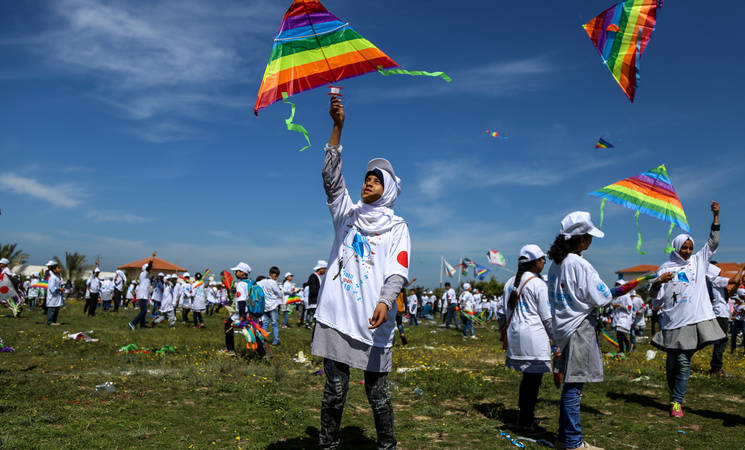 On 13 March 2018, over 1,000 Palestine refugee students from four UNRWA schools in Khan Younis, Gaza, gathered to fly kites of hope in commemoration of the seventh anniversary of the most powerful earthquake ever recorded to hit Japan. For the seventh year, messages of continued empathy and solidarity soared into the skies of Gaza. The Kites of Hope festival was held at the Khan Younis Training Centre in southern Gaza. UNRWA Director of Operations (DUO) in Gaza, Mr. Matthias Schmale, the Ambassador for Palestinian Affairs and Representative of Japan to Palestine, Mr. Takeshi Okubo, as well as the Chief Representative of JICA in Palestine, Ms. Yuko Mitsui, two Japanese NGOs – Campaign for the Children of Palestine and Peace Winds Japan, and UNRWA senior staff attended the event.

“When the teacher told our class that we can participate in the Kites Festival, I felt really happy and I got even happier when I saw around one thousand students flying their kites and sending messages of hope that soared in the sky. I also talked to a number of Japanese students through the Skype call and listened to their experiences and culture, we have many things in common. I wish the Japanese people peace, success and prosperity,” says Lama Bayan Shaqoura, 13 years old, UNRWA student at Al Amal Preparatory Girls School.

“UNRWA remains grateful to Japan for its ongoing support to the people in Gaza and for the close relationship we have shared for many years, especially in times when the future of UNRWA that of Palestine refugees looks very uncertain. The Kites of Hope event is our messages of support and solidarity with the children, people and the government of Japan,” said the DUO in Gaza, Matthias Schmale.

During the event, the Representative of Japan to Palestine, Ambassador Takeshi Okubo, said: “I admire the solidarity and sympathy the Palestinian youth demonstrated today for Japan despite the various challenges facing them, such as the long-standing blockade, the deep scars of the wars, and the suffocating socio-economic conditions.”

The event also included speeches by two UNRWA students. In addition, an award was given to the best student, and a live Skype connection was held between UNRWA school students in Khan Younis and Japanese students in Kamaishi, which was devastated by the 2011 tsunami, allowing for an exchange of experiences in their daily lives, as well as their hopes for the future.

Japan has long been a valued donor to UNRWA. In 2017, the Government of Japan contributed a total of US$ 43.3 million, including some US$ 23 million to the Agency’s human development and humanitarian aid programmes, US$ 8.7 million to support the Agency’s emergency programmes in Syria and the occupied Palestinian territory, and US$ 11.5 million for essential projects. Just last month, Japan contributed US$ 23.5 million towards the Agency’s core human development and humanitarian response efforts and priority projects for the year 2018.