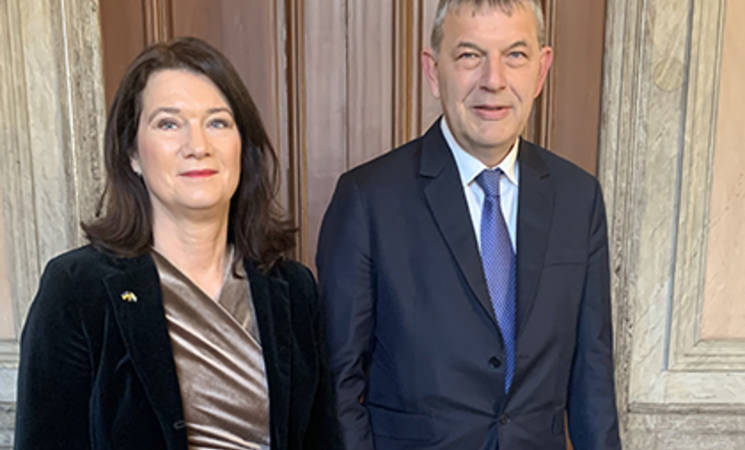 On Thursday 7 April, the Commissioner-General of the United Nations Relief and Works Agency for Palestine Refugees in the Near East (UNRWA), Philippe Lazzarini, concluded a two-day visit to Stockholm, during which he held strategic talks with Swedish officials on the long-standing cooperation between UNRWA and Sweden and the way forward.

While on mission, the Commissioner-General met with the Minister of Foreign Affairs, Ann Linde, Minister for Development Cooperation, Matilda Ernkrans, Sida Deputy Director-General, Maria Ottosson, as well as senior government officials and parliamentarians to raise awareness on the current challenges facing Palestine refugees.

At the Annual High-Level Consultations on 7 April, Mr. Lazzarini and Swedish State Secretary Jenny Ohlsson discussed the Agency’s current financial crisis, the need for multi-annual flexible funding, and the work of UNRWA work to uphold humanitarian principles. Participants stressed that UNRWA programmes are crucial for development, stability and security in a highly volatile region. They emphasized the relevance of UNRWA support to millions of Palestine refugees in Jordan, Lebanon, Syria, the West Bank, including east Jerusalem, and Gaza.

In his meetings with Minister Linde and Minister Ernkrans, discussions focused on the challenges confronting UNRWA, avenues to continue delivering effective and sustainable services, and ways to further enhance the strong partnership with Sweden.

Swedish Minister of Foreign Affairs Ann Linde said: “I had a good meeting with Commissioner-General Philippe Lazzarini in Stockholm to follow up on the International Conference on UNRWA held last November and co-hosted by Sweden and Jordan. UNRWA plays a key role in providing humanitarian assistance to Palestine refugees until a political solution has been found, including to the refugee issue.”

Mr. Lazzarini noted: “We are sincerely grateful for the steadfast support from Sweden to Palestine refugees, contributing to UNRWA services, notably in health, education, relief and emergency operations. Sweden’s active engagement and reliable, predictable, flexible support is much appreciated at a time when UNRWA faces a chronic mismatch between available funding and resources needed, contributing to further instability.”

Sweden is a key financial and political partner of UNRWA. In 2021, Sweden signed a four-year agreement to contribute to the Agency’s core services for a total value of SEK 2.1 billion (US$ 240 million) which represents an increase of SEK 220 million (US$ 25 million) from the previous multi-year agreement. Likewise, Sweden has been a lead country in chairing UNRWA meetings at Ministerial level, such as the 2021 International Conference on UNRWA, co-hosted with Jordan last November.