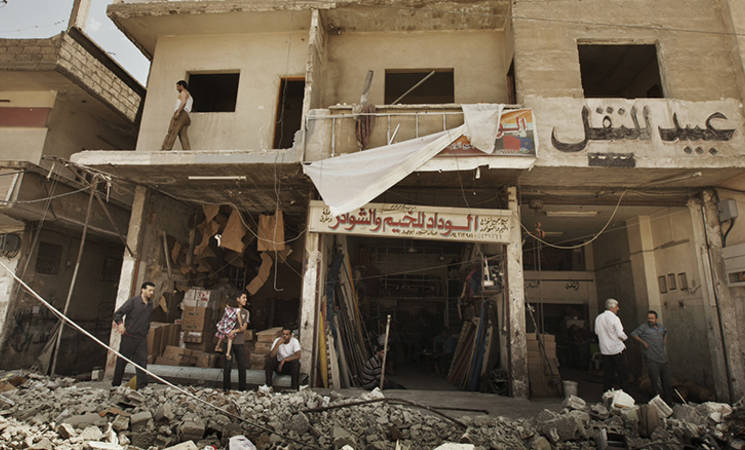 On Thursday, the United Nations Relief and Works Agency (UNRWA) organized a briefing to update a number of donor countries on the Syria Regional Crisis Response Plan, launched in December 2013 to outline the Agency’s plans to respond to the needs of Palestine refugees affected by the ongoing conflict.

UNRWA Deputy Commissioner-General Margot Ellis opened the meeting. “The new appeal is our fifth appeal for the Syria crisis, but the first that spans the full year. This appeal is important because it tells the specific story of the Palestine refugees’ experience in this horrible conflict”, she said. “About 50 per cent of 540,000 Palestine refugees are displaced in Syria, and another 80,000 are dispersed in the region and beyond.”

Thanking donor countries, Mrs. Ellis added: “Our last appeal was 80 per cent funded. This is clear evidence of donor commitment to help, of your trust in UNRWA and of your concern for the Palestine refugee issue.”

During the meeting, the Director of UNRWA Affairs in Syria, Michael Kingsley-Nyinah, updated participants about the situation in Syria. He said: “Palestine refugees are among those who are most affected in Syria, because they suffered poverty long before the war raged. They are in a difficult situation now with no place to go.” Noting that “no country offers them the same hospitality they enjoyed in Syria before the conflict”, Mr. Kingsley-Nyinah continued, “we will remain engaged and continue to do everything we can to alleviate the suffering of Palestine refugees in Syria.”

The Director of UNRWA Operations in Jordan discussed the latest developments regarding the conditions of Palestine refugees from Syria, the challenges facing them in Jordan and the Agency’s achievements. He explained, “In the Jordan field office, our main objective is to stop Palestine refugees from Syria from falling into abject poverty and to provide them with basic humanitarian assistance.”

Concluding the meeting, the Representative of the Commissioner-General, Peter Ford, said: “I want to thank our donors for their support in 2013.” He continued, “We don’t have the biggest share in the UN appeal but we do have the biggest presence in Syria. Thanks to our brave staff, we manage to deliver needed humanitarian assistance including shelter, education, health care and cash.”

The war in Syria is devastating the lives of over half a million Palestine refugees who have been living in exile for six decades. The UNRWA Syria Regional Crisis Response Plan for 2014 sets out the Agency’s interventions to strengthen the resilience of Palestine refugees, and to help them weather the dangers of the conflict.

The number of people in need is rapidly approaching the total population of 540,000 Palestine refugees registered in Syria. For the coming period, UNRWA requires US$ 417.4 million to respond adequately, of which US$ 310 million will support humanitarian needs of Palestine refugees inside Syria, US$ 90.4 million in Lebanon and US$ 14.6 million in Jordan.  US$ 2.4 million is required for emergency response outside of the purview of these three field offices, including cash assistance for Palestinian families from Syria in Gaza, regional coordination, support and advocacy.

Of the 540,000 Palestine refugees registered with UNRWA in Syria, about 270,000 are displaced in the country, and an estimated 80,000 have fled.  Fifty-one thousand have reached Lebanon, 11,000 have identified themselves in Jordan, 5,000 are in Egypt, and smaller numbers have reached Gaza, Turkey and further afield.  Those who have reached Lebanon, Jordan and Egypt face risky legal limbo compounded with living conditions so difficult that many decide to return to the dangers inside Syria.