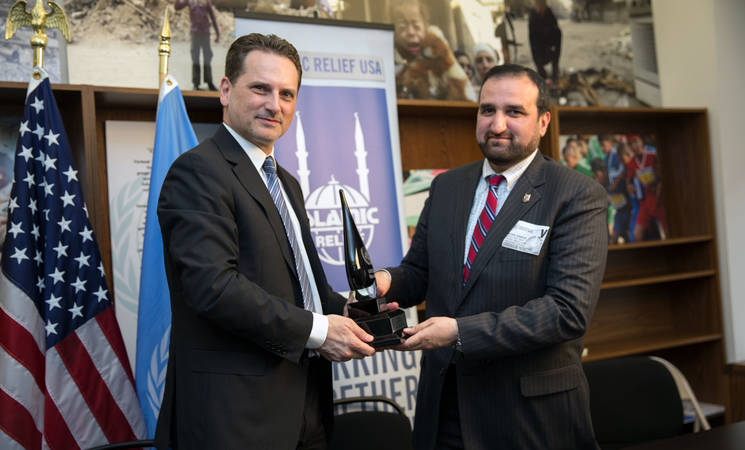 UNRWA Commissioner-General Pierre Krähenbühl expressed sincere appreciation to Islamic Relief USA (IRUSA) Chief Executive Officer Anwar Ahmed Khan on March 17 for their recent contributions totaling US$ 3 million. These funds will help improve the lives of Palestine refugees living in the Gaza Strip in the wake of the 2014 summer conflict.

This meeting was also to commemorate the dynamic partnership between UNRWA and IRUSA to support approximately five million Palestine refugees in Gaza, the West Bank, Lebanon, Syria, and Jordan. The relationship with IRUSA is an example of UNRWA initiatives to expand its private sector partnerships.

Highlighting this partnership, Mr. Krähenbühl said: “We are very grateful to have IRUSA as a committed and creative partner, especially in the past three years, where they provided timely and significant financial contributions in support of projects in Gaza and in Syria. Their support for our work during the 2014 summer crisis had a major impact for Palestine refugees living in very difficult circumstances.”

In order to address the traumatic effects of war on children, IRUSA partnered with UNRWA to provide US$ 1,000,000 for activities in the Gaza Strip. The project, which began in January 2015 and will continue until January 2016, aims to bring psychosocial support to children between the ages of 6 and 15 attending UNRWA schools.. It will enhance the capability of UNRWA school counsellors and supervisors to work with children, particularly those with disabilities.

The IRUSA-UNRWA partnership allows UNRWA to provide additional services to some very vulnerable people. Emphasizing the role of the private sector, Mr. Krähenbühl said: “We appreciate IRUSA’s confidence in UNRWA. Their support has been tremendous. We appreciate their strong solidarity with Palestine refugees. We look forward working to further developing our ongoing strong partnership.”

Praising the importance of the UNRWA-IRUSA partnership, Mr. Khan said: “We appreciate our partnership with UNRWA to help those in need, and hope that we will both leverage our collaboration to help in new ways and reach more people.”