UNRWA urgently calls for safety and protection of civilians in Yarmouk 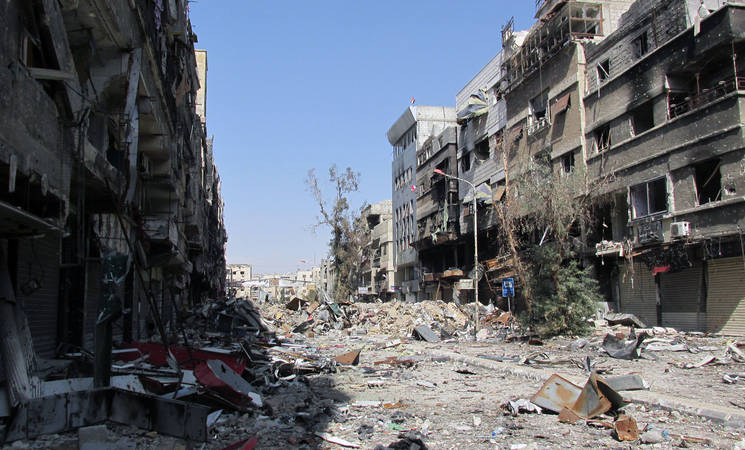 Never has the hour been more desperate in the Palestine refugee camp of Yarmouk, in Damascus. As the fighting intensifies, UNRWA strongly appeals to all armed actors to cease hostilities that place civilians in acute danger and to withdraw immediately from civilian populated areas.

We demand that all parties exercise maximum restraint and abide by their obligations under international law to protect civilians. In addition, we demand humanitarian access and the establishment of secure conditions under which we can deliver life-saving humanitarian assistance and  that enable civilians to be evacuated.

UNRWA calls on concerned states to urgently exercise their authority and influence in order to end the fighting in Yarmouk for the sake of saving civilian lives and alleviating human suffering.

Since 1 April, this residential area of Damascus where some 18,000 people have already been trapped for over two years has been engulfed by intense fighting.  The lives of civilians in Yarmouk have never been more profoundly threatened. Men, women and children - Syrians and Palestinians alike - are cowering in their battered homes in profound fear, desperate for security, food and water, deeply concerned by the grave perils that may yet  come, as  hostilities  continue. It is virtually impossible for civilians to leave Yarmouk as any attempt to move in the open brings high risk.

For over a year now, the besieged inhabitants of Yarmouk, including 3,500 children, have been reliant on UNRWA's irregular distributions of food and other assistance. The level of our aid has been well below the minimum required. Potable water is now unavailable inside Yarmouk and the meager health facilities that existed have been overrun by conflict.  The situation is extremely dire and threatens to deteriorate even further. UNRWA is ready to resume its assistance to the civilian population at any time but for that a cessation of hostilities is required.

UNRWA calls on the international community including UN bodies to be seized of this critical situation without delay and to ensure that all civilians are protected in accordance with the UN charter and international law. Failure to do so could lead to the gravest and most appalling of consequences for civilians in Yarmouk.