Home » Newsroom » Press Releases » US$ 2.5 million Boost for UNRWA Schools in East Jerusalem
Back to Newsroom

US$ 2.5 million Boost for UNRWA Schools in East Jerusalem 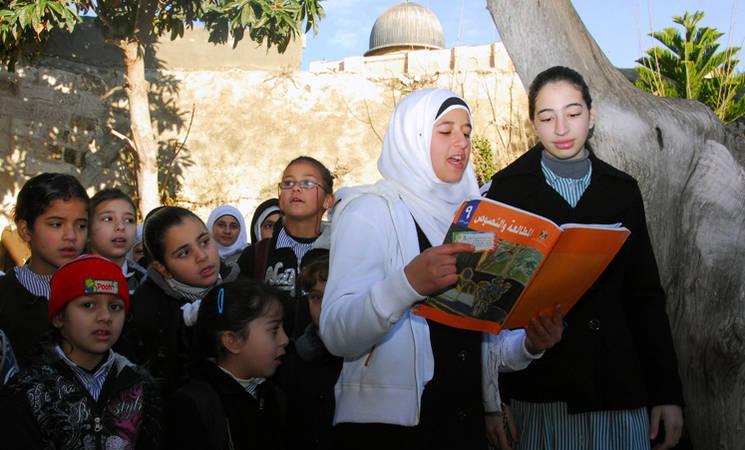 Three schools in East Jerusalem have become the grateful recipients of a US$ 2.5 million grant from the OPEC Fund for International Development (OFID). OFID Director-General Suleiman Al-Herbish, who is currently on an official visit to Palestine, signed an agreement to this effect with the Deputy Commissioner-General of the UN Relief and Works Agency (UNRWA), Margot Ellis, followed by a tour of the Shu’fat camp on the periphery of Jerusalem.

The Shu’fat camp remains one of the most neglected areas due to poor infrastructure and high rates of unemployment. The new OFID Schools Programme (OSPJ) will focus on one elementary girls school, one preparatory girls school and one preparatory boys school that collectively serve 1,669 refugee pupils. It will provide funds for staff salaries, new teaching equipment, summer education programmes and recreational activities, in addition to the much-needed refurbishment of the Preparatory Boys School.

Margot Ellis, UNRWA Deputy Commissioner-General, said: “I would like to thank OFID for their generous and continuing suppport to UNRWA. The new programme is valuable for two main reasons. First the support of a major international fund will be a boost for the morale as well as the fabric of the Shu’fat schools themselves. Secondly UNRWA will benefit from the financial support being given in what promises to be another challenging year when we face a deficit of almost US$ 70 million.”

OFID has been a committed supporter of UNRWA for over three decades, a partnership that delivers essential services to Palestine refugees across the region. The new agreement brings contributions from OFID to UNRWA to a total of over US$ 26 million over the last decade.

OFID
OFID is a multilateral development finance institution established in 1976 by the Member States of the Organization of the Petroleum Exporting Countries (OPEC). The primary aim of OFID is to contribute to the social and economic development of low-income countries. By the end of December 2013, OFID had committed a cumulative US$16.6 billion in development financing to 134 countries spread across Africa, Asia, Latin America, the Caribbean, the Middle East and Europe.