Visit of the UNRWA Commissioner-General to Syria 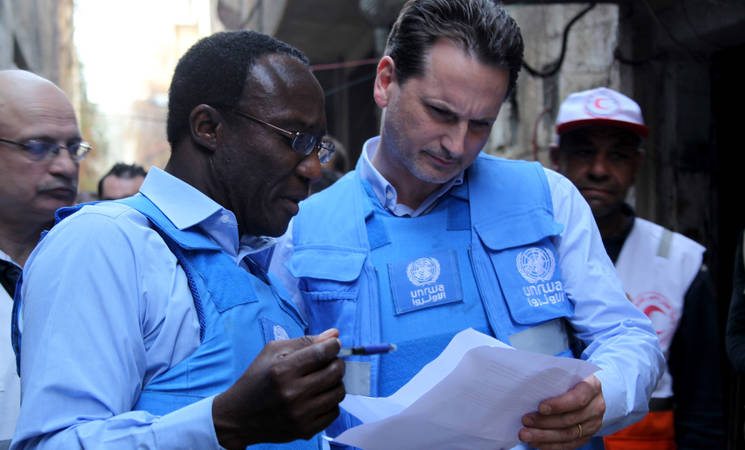 UNRWA Commissioner-General Pierre Krähenbühl visited Syria on 9-11 March to demonstrate solidarity with Palestine refugees and UNRWA staff, who have endured extreme suffering during four years of conflict, and to advocate for expanded humanitarian access.

In meetings with Syrian Government officials, Mr. Krähenbühl acknowledged the facilitation of the Syria authorities in enabling UNRWA to provide humanitarian assistance to crisis-affected Palestine refugees across Syria and sought increased and sustained support for UNRWA work. Noting that more should be done, the Commissioner-General stressed in particular that in Yarmouk, safe, uninterrupted, substantial humanitarian distributions must become the norm. He emphasized that the continuation of regular UNRWA services, such as health and education services, and humanitarian assistance, adapted to the current conflict situation, is vital to protect the resilience of Palestine refugees in Syria.

During a visit to Yarmouk, the Commissioner-General welcomed the resumption since 4 March of UNRWA humanitarian assistance to trapped civilians, through a new distribution point established with the facilitation of the Syrian authorities. This followed a prolonged period of interruption in humanitarian distributions, lasting for over three months from early December 2014 to early March 2015, with reports of widespread deprivation and malnutrition among Yarmouk residents. The Commissioner-General called upon the Government of Syria to maintain and build on this opening to support the civilian population of Yarmouk. He requested that no limits be imposed on the number of days for distributions or on the number of families who may receive assistance on each day of distribution. He urged armed groups within the camp to actively ensure the safety of Palestine refugees and other civilians, and to not interfere with distributions.

The Commissioner-General, after speaking with refugees in Yarmouk, said: “The extreme hardship faced by Palestine refugees in Yarmouk, but also in other locations in Syria as a result of the armed conflict is, from a human point of view, unacceptable. Despite progress in the assistance to civilians in Yarmouk, we remain deeply conscious that far more needs to be done to meaningfully address the needs and dignity of Palestine refugees. I wish to express deep admiration for the courage and determination of Palestine refugees to whom I reaffirm UNRWA’s commitment to provide support and protection. I reiterate my call on all relevant parties to support us in this effort by facilitating unhindered humanitarian assistance and access.”

The Commissioner-General said it was crucial to find a political solution to the conflict affecting Palestinians and Syrians. “There has been too much suffering. We have to remember that we are dealing with yet another generation of Palestine refugees facing the trauma of dispossession and displacement,” he emphasized.

In Qabr Essit, a Palestine refugee camp to which UNRWA recently regained access, the Commissioner-General visited the re-opened UNRWA Alma-Yarmouk School and other rehabilitated facilities in the camp. In Husseiniyeh, from which the entire population had been displaced due to hostilities, the Commissioner-General requested the continuing support for the return of all Palestine refugees to their homes and restoration of UNRWA services there.

The Commissioner-General met with UNRWA staff and expressed recognition and thanks for their tireless efforts in fulfilling their duties to support Palestine refugees in Syria. He paid tribute to the 14 colleagues who had lost their lives during hostilities.