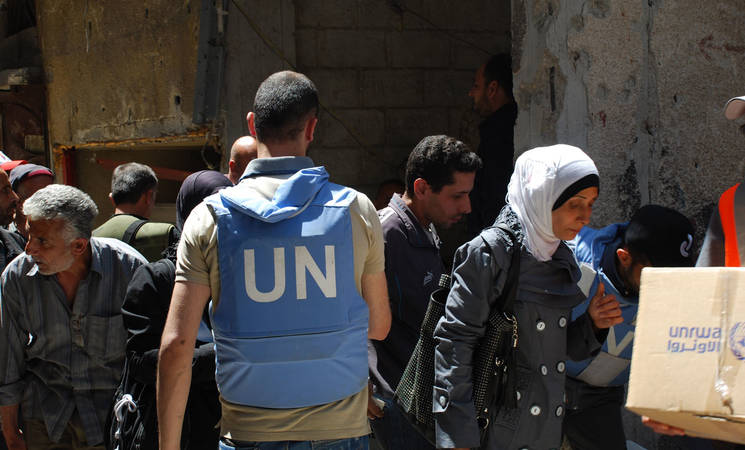 The Zakat Foundation of America (ZF) and American Friends of UNRWA (UNRWA USA) have partnered to provide immediate emergency food aid to Yarmouk, sharing a deep concern for the Palestine refugees in the war-ravaged camp in the southern suburbs of Damascus. In March, Zakat Foundation and UNRWA USA signed a US$ 50,000 agreement to feed nearly 1,000 Palestine refugee families (4,000 individuals) living there.

"Like our donors, all of us at Zakat Foundation are deeply concerned about the extreme conditions the people of Yarmouk are facing. The residents’ stories have been heartbreaking”, said Halil Demir, ZF Executive Director. “To support the desperate residents, through our partnership with UNWRA, we were able to send food parcels to the hungry and needy Palestinian families. This partnership has been a great blessing”, Mr. Demir continued.

The charitable contribution from the Zakat Foundation will aid one of the largest pre-conflict Palestine refugee communities in Syria. Originally home to 160,000 inhabitants, Yarmouk witnessed a sharp decrease in population when clashes intensified in December 2012. After months of siege that began in July 2013, about 18,000 individuals remain trapped in Yarmouk.

The siege conditions have forced families left inside the camp to survive under appalling conditions. There has been widespread malnutrition and disease, and reports of women dying in childbirth. Residents have been forced to eat grass and animal feed for survival.

Currently, a single food parcel from the UN Relief and Works Agency for Palestine Refugees (UNRWA) lasts a family of five to eight members about 10 days. Continuous, substantial and safe humanitarian access to Yarmouk must be indefinitely ensured for the sake of over 18,000 civilians trapped there. UNRWA will continue advocating for this access.

The Zakat Foundation of America (ZF) is an international charity organization that helps generous and caring people reach out to those in need. Their goal is to address immediate needs and ensure the self-reliance of the poorest people around the world with Zakat and Sadaqa dollars of privileged Muslims and the support of other generous donors.

UNRWA USA is an independent non-profit organization that provides support for UNRWA humanitarian work through advocacy, fundraising and education. UNRWA USA aims to educate the general American public about the situation of Palestine refugees and generate support for UNRWA programmes in the the West Bank, Gaza, Syria, Lebanon, and Jordan. US taxpayers are eligible for tax deductions for donations made through UNRWA USA.