Operations and Achievements in Syria 2016

2016 was be marked by escalating violence across Syria, impacting Palestine refugees, especially in Aleppo and Rif Damascus. Since 2012, 17 UNRWA staff members have lost their lives as a result of the conflict, including four in 2016 alone, in Khan Eshieh, Qabr Essit and Aleppo. Many more have sustained life-changing injuries.

The protracted war has also had brutal consequences for civilians. UNRWA has adjusted its regular programmes to better meet the needs of the 450,000 Palestine refugees remaining in Syria, of which over 60 per cent have been internally displaced. Humanitarian access continued to be constrained in various places, including in Dera'a, Khan Eshieh and Yarmouk.

Prior to the war, 560,000 refugees registered with UNRWA in Syria lived in a number of gatherings – both official and unofficial camps. Today, five of the 12 official/unofficial Palestine refugee camps have been either destroyed or remain inaccessible to the Agency. These include; Ein elTal camp in north-east Aleppo, Yarmouk in south of Damascus, Sbeineh camp 14 km south of Damascus, Khan Eshieh camp 27 km south-west of Damascus and Dera’a camp, south of Dera’a City. 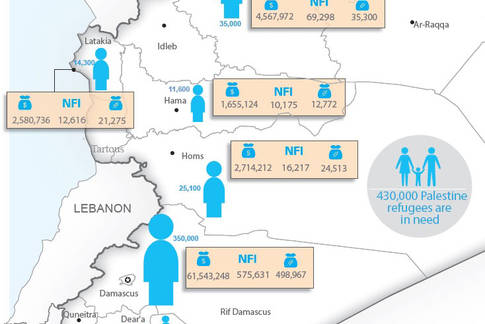