Approximately 27,000 Palestine refugees were displaced from Nahr el-Bared camp (NBC) and its adjacent areas in northern Lebanon in mid-2007, as a result of the conflict between the Lebanese Armed Forces (LAF) and the extremist Fatah Al-Islam group. The camp was pounded with heavy artillery and aerial bombardments during the three month siege and an estimated 95% of all buildings and infrastructure were either destroyed or damaged beyond repair. The first stages of a major reconstruction and recovery effort – to rebuild the camp and allow displaced refugees to return to their homes – are now underway. A phased approach to reconstruction is planned, through which families will begin to return to their homes inside the camp by the end of 2009. The reconstruction is due to be completed by mid-2011.

From the outset, UNRWA has led the relief effort for displaced refugees, in close coordination with the Lebanese government, through the Lebanese-Palestinian Dialogue Committee (LPDC), and a wide range of local and international partners. Families fled without any belongings and with only limited resources and the initial emergency response focused on provision of critical lifesaving assistance, including food, water/sanitation and basic healthcare and shelter. As the extent of the crisis became clear, interventions have been enhanced to meet the basic needs of families facing a long period of displacement. Temporary shelters and related infrastructure were upgraded and facilities and equipment at prefabricated schools and health centres improved. Livelihoods activities have also been initiated, to support the social and economic recovery for displaced communities.

Over the duration of the Appeal and as early recovery activities gather momentum, UNRWA will seek to transfer increasing numbers of families from food assistance rolls to livelihoods programes, including employment support and skills training. Throughout, assistance will be provided on the basis of need. In total, the Agency is seeking US$ 42,711,715 for relief and early recovery interventions covered in this appeal. 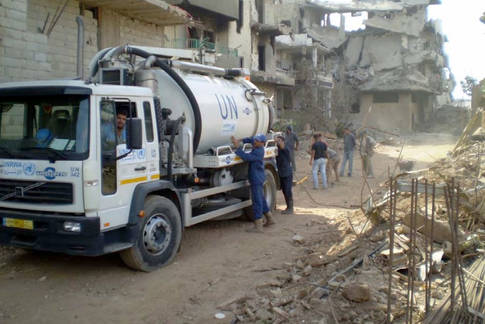