The violent conflict in the Gaza Strip that began on 8 July has caused immense human suffering and devastation. The numbers of civilian fatalities, injuries and displacements, and the destruction of homes and other civilian infrastructure, are unprecedented. The emergency in Gaza is far from over. As of 22 August, a quarter of the total Gaza population is internally displaced as a result of the hostilities. Approximately 300,000 are sheltered in 85 UNRWA schools, 45,000 are hosted in non-UNRWA premises, and at least 137,400 more are in other hosting arrangements. With the summer 2014 hostilities in their seventh week, the number of internally displaced persons (IDPs) seeking refuge in UNRWA installations has reached levels never before seen in Gaza’s history.

As hostilities persist and destruction continues, the number of Palestinians seeking shelter is expected to increase further, along with the humanitarian needs of the population, and consequently also the scope of UNRWA’s response. Additionally, it is evident from the level of destruction of housing that many among the displaced population will not be able to return home once the hostilities have ceased.

The Agency has revised–yet again- the projections of assistance needed until the end of the year and the funding required to respond appropriately. A total of US$ 295.4 million is necessary to enable UNRWA to provide assistance through the end September, within a revised scenario of up to 500,000 displaced people seeking assistance, 65 per cent of whom are expected to continue to take shelter in UNRWA schools. 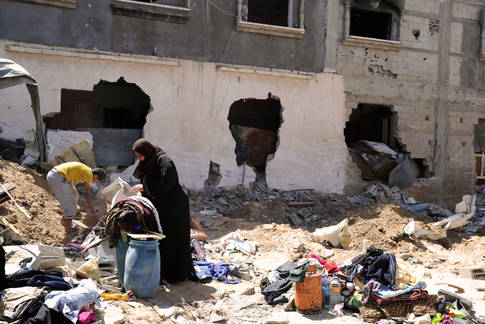