The registered Palestine refugee population was about 5.4 million at the end of 2018. Out of these, the number of refugees accessing UNRWA health services (the ‘served population’) was about 3.0 million, equivalent to 55 per cent of the registered population. These refugees were served by 3,156 UNRWA health staff. The average daily medical consultations per doctor were 82, and the total number of outpatient consultations was 8.6 million. The total number of dental consultations including both screening and curative stood at more than 0.9 million.

The number of patients with non-communicable diseases (NCDs) is increasing consistently by approximately 5.0 per cent per year. The total number of patients attending our health centres with diabetes was about 42,000; with both diabetes and hypertension was about 110,000; and with hypertension only was over 119,000. The control rate for patients diagnosed with diabetes Agency-wide was 31.0 per cent, according to defined criteria using HbA1c test results. Risk factors among NCD patients included smoking (13.0 per cent), physical inactivity (50.5 per cent), and obesity (52.5 per cent), and raised cholesterol (43.5 per cent).

Agency-wide prevalence rates of diabetes mellitus and hypertension were 14.9 per cent and 21.9 per cent, respectively, for patients who were aged 40 years and older. Analysis for drugs expenditure revealed 43.0 per cent was spent on medicines for the treatment of NCDs.

During 2018, UNRWA primary health-care facilities cared for 91,274 pregnant women, representing a coverage rate of 58.7 per cent of all expected pregnancies among the served refugee population. Lastly, analysis of the 2018 data reveals that the Agency-wide percentage of pregnant women who paid four or more antenatal visits was 91.4 per cent, with an average of 6.0 visits Agency-wide.

Since 1950, UNRWA remains committed, together with WHO and other concerned UN agencies and authorities, to its mission to help Palestine refugees achieve their full human development potential and well-being. 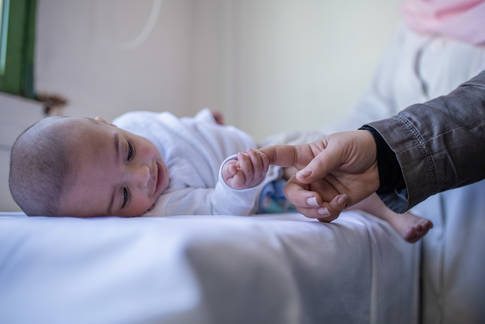