Throughout December 2014, Yarmouk and its surrounding areas have seen a serious escalation in armed conflict, with frequent exchanges of fire and use of heavy weapons including by groups inside Yarmouk. The risks faced by UNRWA distribution staff and refugees attempting to collect assistance have increased considerably. As a result, UNRWA was only able to provide successful distribution and health provision on three days between 1 and 31 December. Approximately 400 food parcels are required each day to meet the minimum food needs of this extremely vulnerable population. In December, only 636 food parcels, 635 hygiene kits, 629 jerry cans (plus water), and 4,000 polio vaccines have been distributed in total. A total of 280 patients have been treated at Yarmouk’s temporary health point, compared to many thousands in previous months. 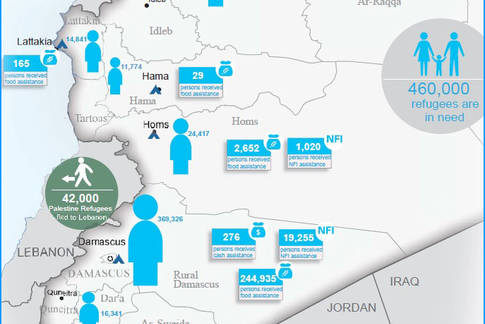