UNRWA provides humanitarian assistance to up to 430,000 refugees and regular services such as primary health care and education for up to 450,000 refugees in Syria. The majority of refugees currently live in accessible areas, while approximately 47,000 reside in areas such as Yarmouk, Qudsaya, Khan Eshieh, Ramadan camp, Muzeireb, Jillin, and other areas around Dera’a City, where humanitarian access remains extremely constrained.
On 1 December, UNRWA launched the #shareyourwarmth winterization campaign, with a target of raising US$ 2 million to ensure that the most vulnerable Palestine refugees have the food and shelter they need to prepare for and cope during the winter months. The campaign has gained widespread media coverage and reached close to 6.2 million people on social media. 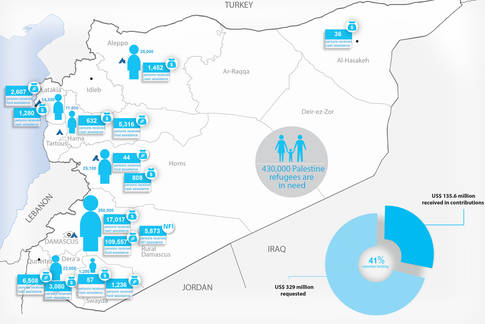