UNRWA Commissioner-General Pierre Krähenbühl launched the Emergency Appeal on 2 February in Amman. Together with the Lebanon, Jordan and Syria Field Directors, the plight of Palestine refugees in Syria and the impact the crisis has had over the past fi¬ve years was reaffirmed to over 50 diplomatic, Jordanian government and other UN representatives.

UNRWA appealed to donors for US$ 329 million to meet the critical humanitarian assistance needs required to support 450,000 Palestine refugees inside Syria throughout 2016. This was further stressed by UN Secretary-General Ban Ki-moon, whose opening remarks to the London pledging conference stated, “[W]e are here to ¬find ways to protect civilians. Palestinian refugees, already vulnerable, are doubly dispossessed and in a desperate position.” 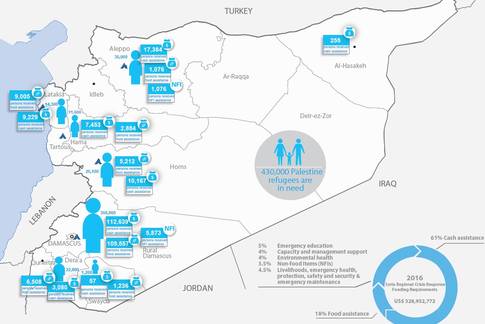