International Women’s Day: UNRWA celebrated the resilience of Palestine refugee women in Syria through staged performances at the Damascus Opera House on 23 March. The evening presented three acts including a dance performance expressing the equality of roles women and men have in society. The second act featured a short documentary ‘Enough is Enough’, with stories from three gender-based violence survivors who found safety and advice thanks to UNRWA Family Support Ocers. The third act, a monologue titled ‘I have a voice’ highlighted the need to end gender based violence and the disempowering practice of early marriage. "Women are critical to nding solutions to societal challenges" said the performer. 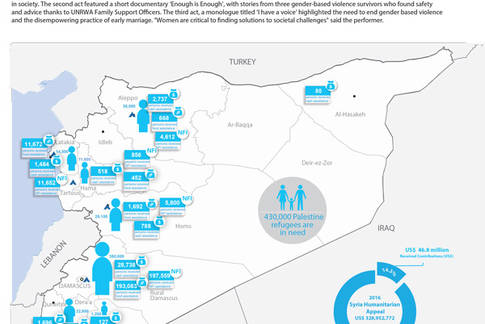